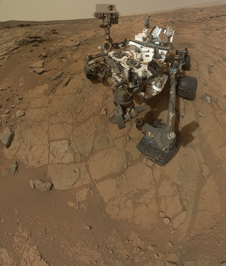 PASADENA, Calif. - NASA's Mars rover Curiosity has transitioned from precautionary "safe mode" to active status on the path of recovery from a memory glitch last week. Resumption of full operations is anticipated by next week.

Controllers switched the rover to a redundant onboard computer, the rover's "B-side" computer, on Feb. 28 when the "A-side" computer that the rover had been using demonstrated symptoms of a corrupted memory location. The intentional side swap put the rover, as anticipated, into minimal-activity safe mode.

"We are making good progress in the recovery," said Mars Science Laboratory Project Manager Richard Cook, of NASA's Jet Propulsion Laboratory. "One path of progress is evaluating the A-side with intent to recover it as a backup. Also, we need to go through a series of steps with the B-side, such as informing the computer about the state of the rover -- the position of the arm, the position of the mast, that kind of information."

The cause for the A-side's memory symptoms observed last week remains to be determined.