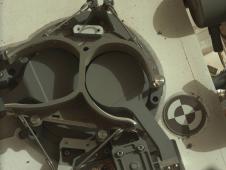 PASADENA, Calif. -- A pinch of fine sand and dust became the first solid Martian sample deposited into the biggest instrument on NASA's Mars rover Curiosity: the Sample Analysis at Mars, or SAM.

Located inside the rover, SAM examines the chemistry of samples it ingests, checking particularly for chemistry relevant to whether an environment can support life. Curiosity's robotic arm delivered SAM's first taste of Martian soil to an inlet port on the rover deck on Nov. 9. During the following two days, SAM used mass spectrometry, gas chromatography and laser spectrometry to analyze the sample.

The sample came from the patch of windblown material called "Rocknest," which had provided a sample previously for mineralogical analysis by Curiosity's Chemistry and Mineralogy (CheMin) instrument. CheMin also received a new sample from the same Rocknest scoop that fed SAM. SAM has previously analyzed samples of the Martian atmosphere.

"We received good data from this first solid sample," said SAM Principal Investigator Paul Mahaffy of NASA Goddard Space Flight Center, Greenbelt, Md. "We have a lot of data analysis to do, and we are planning to get additional samples of Rocknest material to add confidence about what we learn."