This image contributed to an interpretation by NASA's Mars rover Curiosity science team that some of the bright particles on the ground near the rover are native Martian material. Other light-toned material nearby (see PIA16230) has been assessed as small debris from the spacecraft. Image Credit: NASA/JPL-Caltech/MSSS
› Full image and caption       › Latest images       › Curiosity gallery       › Curiosity videos 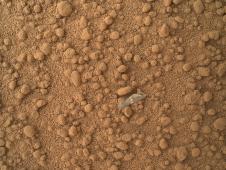 This image from the Mars Hand Lens Imager (MAHLI) camera on NASA's Mars rover Curiosity shows a small bright object on the ground beside the rover at the "Rocknest" site. The object is just below the center of this image. It is about half an inch (1.3 centimeters) long. The rover team has assessed this object as debris from the spacecraft, possibly from the events of landing on Mars. Image Credit: NASA/JPL-Caltech/MSSS
› Full image and caption

Commands will be sent to Curiosity today instructing the rover to collect a third scoop of soil from the "Rocknest" site of windblown Martian sand and dust. Pending evaluation of this Sol 69 (Oct. 15, 2012) scooping, a sample from the scoopful is planned as the first sample for delivery -- later this week -- to one of the rover's internal analytical instruments, the Chemistry and Mineralogy (CheMin) instrument. A later scoopful will become the first solid sample for delivery to the rover's other internal analytical instrument, the Sample Analysis at Mars (SAM) instrument.

The rover's second scoopful, collected on Sol 66 (Oct. 12), was intentionally discarded on Sol 67 due to concern about particles of bright material seen in the hole dug by the scooping. Other small pieces of bright material in the Rocknest area have been assessed as debris from the spacecraft. The science team did not want to put spacecraft material into the rover's sample-processing mechanisms. Confidence for going ahead with the third scooping was based on new assessment that other bright particles in the area are native Martian material. One factor in that consideration is seeing some bright particles embedded in clods of Martian soil. Further investigations of the bright particles are planned, including some imaging in the Sol 69 plan.