This engineering animation depicts the moves that NASA's rover Curiosity made on Sept. 22, 2012, when the rover touched a Martian rock with its robotic arm for the first time.     › Download video 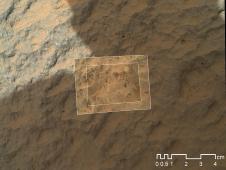 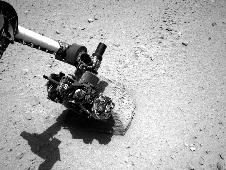 This image shows the robotic arm of NASA's Mars rover Curiosity with the first rock touched by an instrument on the arm. Image credit: NASA/JPL-Caltech
› Full image and caption

PASADENA, Calif. -- NASA's rover Curiosity touched a Martian rock with its robotic arm for the first time on Sept. 22, assessing what chemical elements are in the rock called "Jake Matijevic."

After a short drive the preceding day to get within arm's reach of the football-size rock, Curiosity put its Alpha Particle X-Ray Spectrometer (APXS) instrument in contact with the rock during the rover's 46th Martian day, or sol. The APXS is on a turret at the end of the rover's 7-foot (2.1-meter) arm. The Mars Hand Lens Imager (MAHLI), on the same turret, was used for close-up inspection of the rock. Both instruments were also used on Jake Matijevic on Sol 47 (Sept. 23).

The Chemistry and Camera (ChemCam) instrument, which shoots laser pulses at a target from the top of Curiosity's mast, also assessed what chemical elements are in the rock Jake Matijevic. Using both APXS and ChemCam on this rock provides a cross calibration of the two instruments.

Curiosity landed on Mars seven weeks ago to begin a two-year mission using 10 instruments to assess whether a carefully chosen study area inside Gale Crater has ever offered environmental conditions favorable for microbial life.