Musician will.i.am addresses students at JPL during an event celebrating the first time in history that a recorded song has been beamed back to Earth from another planet.     › Download video 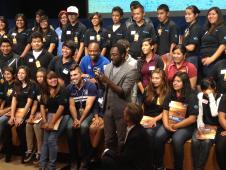 With students and NASA space shuttle astronaut Leland Melvin looking on, musical artist will.i.am posts a tweet soon after his song "Reach for the Stars" was beamed back from the Curiosity Mars rover and broadcast to a live audience at NASA's Jet Propulsion Laboratory in Pasadena, Calif. Image credit: NASA/JPL-Caltech
› Full image and caption 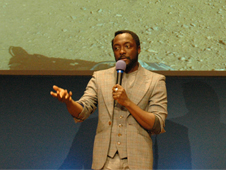 Musical artist will.i.am addresses a crowd of students at NASA's Jet Propulsion Laboratory in Pasadena, Calif., where his new single, "Reach for the Stars," was beamed down from the Curiosity Mars rover and broadcast to the live audience. Image credit: NASA/JPL-Caltech
› Larger view

PASADENA, Calif. -- For the first time in history, a recorded song has been beamed back to Earth from another planet. Students, special guests and news media gathered at NASA's Jet Propulsion Laboratory in Pasadena, Calif., today to hear "Reach for the Stars" by musician will.i.am after it was transmitted from the surface of Mars by the Curiosity rover.

NASA Administrator Charles Bolden addressed the crowd in a video message encouraging students to study science, technology, engineering and math (STEM). "Mars has always fascinated us, and the things Curiosity tells us about it will help us learn about whether or not life was possible there," Bolden said. "And what future human explorers can expect. will.i.am has provided the first song on our playlist of Mars exploration."

In opening remarks, NASA Associate Administrator for Education and space shuttle astronaut Leland Melvin said, "I can think of no greater way to honor NASA pioneer Neil Armstrong's life and legacy than to inspire today's students to follow his path. That first footprint that Neil placed on the lunar surface left an indelible mark in history. Perhaps one of our students here today or watching on NASA Television will be the first to set foot on the surface of Mars and continue humanity's quest to explore."

Musician and entrepreneur will.i.am shared his thoughts about "Reach for the Stars" becoming the first interplanetary song and an anthem for NASA education. The entertainer is a well-known advocate of science and technology education. He said, "Today is about inspiring young people to lead a life without limits placed on their potential and to pursue collaboration between humanity and technology through STEAM education. I know my purpose is to inspire young people, because they will keep inspiring me back."

After completing a journey of more than 700 million miles from Earth to Mars and back, the opening orchestral strains of "Reach for the Stars" filled the auditorium. The event added to continuing worldwide interest in Curiosity's mission.

NASA engineers spoke to attendees about the Curiosity mission, and the systems engineering and orbital mechanics involved in getting the song file back from Mars. Students had the opportunity to ask questions of all program participants. Earlier in the day, students received a guided tour of JPL to view rover models and learn about STEM career options.

During the event, will.i.am's i.am angel Foundation and Discovery Education announced a $10 million classroom education initiative that will reach 25 million students annually, including many from underserved communities. Focused on STEAM (science, technology, engineering, arts and mathematics) educational themes, the Discovery Education initiative will incorporate NASA content and space exploration themes as part of the curriculum.

The event will be replayed on NASA Television. For schedule information, visit: http://www.nasa.gov/ntv .