This video steps viewers through a portion of the choreography needed to land NASA's Curiosity rover on Mars. It starts with a computer simulation from NASA's Eyes on the Solar System program and uses actual images from Curiosity's Mars Descent Imager. It ends with a high-resolution color image from Curiosity's Mast Camera.     › Download video 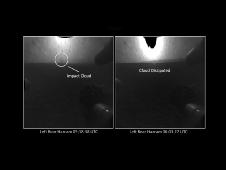 The distant blob seen in the view on left, taken by a Hazard-Avoidance camera on NASA's Curiosity rover, may be a cloud created during the crash of the rover's descent stage. Image credit: NASA/JPL-Caltech › Full image and caption

10:32 p.m. on the evening of Aug. 5 was turning out to be one long minute for Steve Sell. Of course, the previous six had been significantly protracted as well. When added together, the entry, descent and landing of NASA's Curiosity Mars rover had been touted as "Seven Minutes of Terror," and as far as Sell was concerned things were trending in that direction. What the 42-year-old engineer from Gettysburg, Pa., wanted more than anything in that seventh minute was to hear the words "UHF Strong."

There had been a debate amongst Curiosity's entry, descent and landing team about what their first words to indicate that the rover had reached the surface should be. The EDL team at NASA’s Jet Propulsion Laboratory knew their microphones would be "hot" and that NASA TV was beaming the landing event out live to anybody with the desire and wherewithal to watch. They also knew that landing safely on Mars meant more than simply landing on Mars – which any one of the 34 engineers present at JPL’s Building 264 Room 230, also known as the “EDL War Room,” will tell you at great length is not simple at all. Their rocket-propelled backpack and rover-lowering Sky Crane system were getting their first all-up test 154 million miles (248 million kilometers) away from home, and there was still plenty that could go wrong even after the rover was gently placed on the surface… plenty.

What if the descent stage kept descending right on top of the rover? What if the bridles connecting the two did not separate? What if the algorithm used to throttle up the engines for the flyaway maneuver was not accurate?

It was the remaining "what ifs" that made what those first words from Mars confirming the rover was on the surface so important.

"If we said 'touchdown,' then people not intimately familiar with EDL might infer that Curiosity was good to go," said Sell. "But two more major calls had to be made before I could begin to breathe again."

At 10:31:45 p.m. PDT, Jody Davis saw the event record, or EVR, she was looking for appear on her computer screen in the EDL War Room. She knew that the "Touchdown" EVR would only be beamed down if the rover's descent stage had throttled down -- a result which could only occur if the descent stage had offloaded half its weight. The only way the rover could offload half its weight in an instant is if it were being held up from below.

Davis, a member of the EDL team and an engineer from NASA Langley Research Center in Virginia, gave the much reviewed, pre-scripted call -- "Tango Delta nominal."

Tango and Delta are phonetic identifiers for T and D, which the team used to represent touchdown.

One down, two to go, thought Sell. The next call the EDL team was looking for was "RIMU Stable."

"RIMU stands for Rover Inertial Measurement Unit," said Sell. "The RIMU gives us the rover's orientation as well as any movement it is making. If we landed on a crumbling crater wall or an unstable sand dune, or were being dragged by a still-connected descent stage across the surface, then the RIMU would show that in its data set."

The War Room's David Way, an engineer from the Langley Research Center, Hampton, Va., was monitoring that unit's performance. Eight long seconds after Jody's call, he found the EVR he was looking for.

One more crucial milestone to go.

Not receiving that one final call would be something of a long shot to be sure. After all, the rover was down on the ground, and RIMU indicated it wasn't moving. Their system had been proven every step of the way so far. But everyone in the EDL War Room got as far as they did not only because they were excellent engineers, but because of their predilection for concocting unappetizing entry, descent and landing scenarios – and then figuring out how to elude them. And one ton of fuel-laden, rocket-firing descent stage climbing straight up, only to fall right back down on their factory-fresh landing site and an otherwise good-to-go, roving Mars laboratory was about as unappetizing a scenario as Sell could imagine.

That final confirmation would not come from Sell’s location. The final confirmation that Curiosity had landed clean would come 200 yards and one building away from the EDL War Room. There, in the Mission Support Area of JPL's Building 230, Adam Steltzner, the mission's EDL phase lead, was staring across the room at Brian Schratz, who was not making eye contact with anyone. Schratz, the EDL communications engineer, was staring at his screen. His task was not to check for a good-news EVR from the rover. Instead, he was waiting to see if the UHF signal became intermittent, faded away or just cut out altogether – all potential indications that the rover and descent stage had not gone their separate ways.

Eight seconds after the RIMU call – Schratz looked up.

With that, Schratz had all the data he needed. Seated directly in front of the pacing EDL Phase Lead, Allen Chen felt a jab in the shoulder. Chen, the mission's (capsule communicator), knew it could only mean one thing.

With time to reflect upon the events of August 5, Curiosity's EDL phase lead states only one thing fazed him that evening.

"The biggest surprise about EDL was there were no surprises," said Steltzner. "But soon after we were confirmed down, what I saw on the screen absolutely floored me."

Months, and even years before landing, Steltzner and his team had kicked around the idea of imaging the final moments of the descent stage's short life. Wouldn't it be cool if the rover's first pic could be timed just so?

Working with the surface operations team, they got the timing of the first images from the surface timed for about 40 seconds after landing – a little bit after the time the descent stage was estimated to impact the ground after flying away to a safe distance.

"We thought the odds were pretty small that we would see it," said Steltzner.

But there, right in the upper-middle of those first rear-hazcam images, was a plume of dust rising from the surface.

A later image, taken by the High Resolution Imaging Science Experiment camera, or HiRISE, aboard NASA's Mars Reconnaissance Orbiter spacecraft in Martian orbit, provides the location of what Curiosity team members believe is the final destination of the powered descent stage – or Sky Crane – which was programmed to fly away automatically after safely depositing the rover on the surface.

"With HiRISE we get the Sky Crane's distance and its compass heading with respect to the rover," said Steltzner. "The cloud seen in the distance on the Hazcam images is in perfect alignment with where we would expect to see the descent stage.

"The inescapable conclusion is that we captured the result of what happens when about 2,200 pounds (1,000 kilograms) of Sky Crane intersect with Martian surface at a pretty good clip. It is truly an amazing shot on a day full of amazing shots."

A video of imagery from the rover during EDL, including Adam Steltzner's commentary, is available at: http://1.usa.gov/NffoWl .