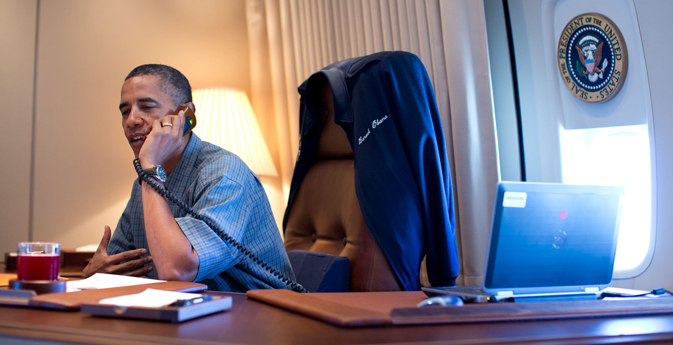 President Barack Obama talks on the phone with NASA's Curiosity Mars rover team aboard Air Force One during a flight to Offutt Air Force Base in Nebraska, Aug. 13, 2012. (Official White House Photo by Pete Souza)

This photograph is provided by THE WHITE HOUSE as a courtesy and may be printed by the subject(s) in the photograph for personal use only. The photograph may not be manipulated in any way and may not otherwise be reproduced, disseminated or broadcast, without the written permission of the White House Photo Office. This photograph may not be used in any commercial or political materials, advertisements, emails, products, promotions that in any way suggests approval or endorsement of the President, the First Family, or the White House.
› Larger view       › Latest images       › Curiosity gallery       › Curiosity videos 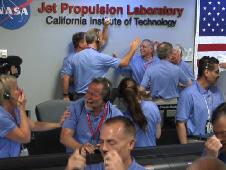 PASADENA, Calif. -- President Barack Obama this morning told the flight control team for NASA's Curiosity Mars rover, "You made us all proud."

"What you've accomplished embodies the American spirit," the president said. "Our expectation is that Curiosity is going to be telling us things we did not know before and laying the groundwork for an even more audacious undertaking in the future, and that's a human mission to Mars."

Obama said Curiosity's landing advances his goals of improving education in science, technology, engineering and mathematics. "This is the kind of thing that inspires kids across the country," he said. "They're telling their moms and dads they want to be part of a Mars mission, maybe even the first person to walk on Mars."

Elachi thanked Obama for the call and added, "Hopefully we inspire some of the millions of young people who were watching the landing."

Obama noted, "You guys should be remarkably proud. Really what makes us best as a species is this curiosity we have -- this yearning to discover and know more and push the boundaries of knowledge."

The rover team has completed three of the four days of activities needed for transitioning Curiosity's two main computers to a version of software suited for the rover's work on the surface of Mars. The surface work will include driving and using tools on a robotic arm. During landing, and the first few days after landing, the spacecraft's computers used a version of flight software loaded with landing-day capabilities that no longer are needed.

"After the software transition, we go back to preparing the rover to be fully functional for surface operations," Curiosity mission manager Art Thompson said. "We are looking forward to a first drive in about a week." The first short drive will be part of a few weeks of initial checkouts and observations to assess equipment on the rover and characteristics of the landing site.

Curiosity carries 10 science instruments with a total mass 15 times as large as the science payloads on NASA's Mars rovers Spirit and Opportunity. Some of the tools are the first of their kind on Mars, such as a laser-firing instrument for checking rocks' elemental composition from a distance. Curiosity will use a drill and scoop located at the end of its robotic arm to gather soil and powdered samples of rock interiors, then sieve and parcel out these samples into the rover's analytical laboratory instruments.

To handle this science toolkit, Curiosity is twice as long and five times as heavy as Spirit or Opportunity. The Gale Crater landing site at 4.59 degrees south, 137.44 degrees east, places the rover within driving distance of layers of the crater's interior mountain. Observations from orbit have identified clay and sulfate minerals in the lower layers, indicating a wet history.

For more about NASA's Curiosity mission, visit http://www.nasa.gov/mars and http://mars.jpl.nasa.gov/msl .