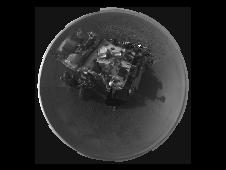 This Picasso-like self portrait of NASA's Curiosity rover was taken by its Navigation cameras, located on the now-upright mast. Image credit: NASA/JPL-Caltech
› Full image and caption
› Curiosity latest images 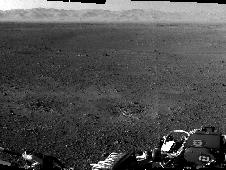 These are the first two full-resolution images of the Martian surface from the Navigation cameras on NASA's Curiosity rover, which are located on the rover's "head" or mast. Image credit: NASA/JPL-Caltech
› Full image and caption

The images from Curiosity's just-activated navigation cameras, or Navcams, include the rover's first self-portrait, looking down at its deck from above. Another Navcam image set, in lower-resolution thumbnails, is the first 360-degree view of Curiosity's new home in Gale Crater. Also downlinked were two, higher-resolution Navcams providing the most detailed depiction to date of the surface adjacent to the rover.

"These Navcam images indicate that our powered descent stage did more than give us a great ride, it gave our science team an amazing freebie," said John Grotzinger, project scientist for the mission from the California Institute of Technology in Pasadena. "The thrust from the rockets actually dug a one-and-a-half-foot-long [0.5-meter] trench in the surface. It appears we can see Martian bedrock on the bottom. Its depth below the surface is valuable data we can use going forward."

Another image set, courtesy of the Context Camera, or CTX, aboard NASA's Mars Reconnaissance Orbiter has pinpointed the final resting spots of the six, 55-pound (25-kilogram) entry ballast masses. The tungsten masses impacted the Martian surface at a high speed of about 7.5 miles (12 kilometers) from Curiosity's landing location.

Curiosity carries 10 science instruments with a total mass 15 times as large as the science payloads on NASA's Mars rovers Spirit and Opportunity. Some of the tools, such as a laser-firing instrument for checking rocks' elemental composition from a distance, are the first of their kind on Mars. Curiosity will use a drill and scoop, which are located at the end of its robotic arm, to gather soil and powdered samples of rock interiors, then sieve and parcel out these samples into the rover's analytical laboratory instruments.

To handle this science toolkit, Curiosity is twice as long and five times as heavy as Spirit or Opportunity. The Gale Crater landing site places the rover within driving distance of layers of the crater's interior mountain. Observations from orbit have identified clay and sulfate minerals in the lower layers, indicating a wet history.

The Mars Reconnaissance Orbiter's High Resolution Imaging Science Experiment (HiRISE) camera is operated by the University of Arizona in Tucson. The instrument was built by Ball Aerospace & Technologies Corp. in Boulder, Colo. The Mars Reconnaissance Orbiter and Mars Exploration Rover projects are managed by JPL for NASA's Science Mission Directorate, Washington. The rover was designed, developed and assembled at JPL. JPL is a division of the California Institute of Technology in Pasadena. Lockheed Martin Space Systems in Denver built the orbiter.

For more about NASA's Curiosity mission, visit: http://www.nasa.gov/mars and http://marsprogram.jpl.nasa.gov/msl .