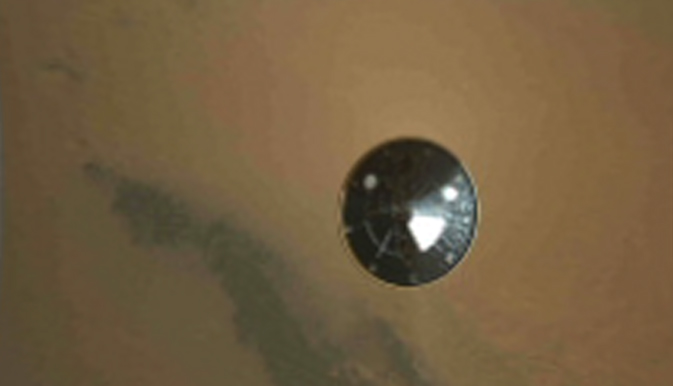 This color thumbnail image was obtained by NASA's Curiosity rover during its descent to the surface of Mars on Aug. 5 PDT (Aug. 6 EDT). The image was obtained by the Mars Descent Imager instrument known as MARDI and shows the 15-foot (4.5-meter) diameter heat shield when it was about 50 feet (16 meters) from the spacecraft. Image credit: NASA/JPL-Caltech/MSSS
› Full image and caption       › See descent video       › Curiosity latest images 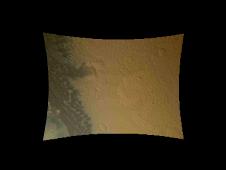 This color thumbnail image was obtained by NASA's Curiosity rover during its descent to the surface of Mars on Aug. 5 PDT (Aug. 6 EDT). Image credit: NASA/JPL-Caltech/MSSS
› Full image and caption 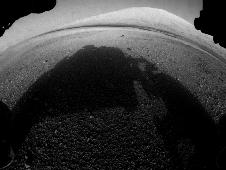 This image shows one of the first views from NASA's Curiosity rover, which landed on Mars the evening of Aug. 5 PDT (early morning hours Aug. 6 EDT). Image credit: NASA/JPL-Caltech
› Full image and caption

PASADENA, Calif. - Earlier today, just hours after NASA's Curiosity rover landed on Mars, a select group of images taken by the onboard Mars Descent Imager, or MARDI, were beamed back to Earth. The 297 color, low-resolution images, provide a glimpse of the rover's descent into Gale Crater. They are a preview of the approximately 1,504 images of descent currently held in the rover's onboard memory. When put together in highest resolution, the resulting video is expected to depict the rover's descent from the moment the entry system's heat shield is released through touchdown.

"The image sequence received so far indicates Curiosity had, as expected, a very exciting ride to the surface," said Mike Malin, imaging scientist for the Mars Science Lab mission from Malin Space Systems in San Diego. "But as dramatic as they are, there is real other-world importance to obtaining them. These images will help the mission scientists interpret the rover's surroundings, the rover drivers in planning for future drives across the surface, as well as assist engineers in their design of forthcoming landing systems for Mars or other worlds."

The image of the heat shield falling away is online at: http://1.usa.gov/RSVufL.

The MARDI sequence is online at: http://1.usa.gov/MZqGxv.

The MARDI camera is located on the chassis of the Curiosity rover. Just before the heat shield fell away, MARDI began its imaging task. The images selected for early downlink to Earth were taken at different points in Curiosity's final descent toward the surface. One of the earliest images shows the entry vehicle's heat shield 50 feet (15 meters) and falling away after separating from the vehicle three seconds before. A set of images demonstrates some of the gyrations Curiosity went through while on the parachute. Another remarkable set of images depicts the final moments leading up to landing, where the exhaust from four of the descent stage's 742 pounds of thrust rockets billow up dust from the Martian surface.

"A good comparison is to that grainy onboard film from Apollo 11 when they were about to land on the moon," said Malin.

Those MARDI images downlinked so far are low-resolution thumbnails, 192 by 144 pixels. In the months ahead, as communications between rover and Earth become more robust, full-frame images 1,600 by 1,200 pixels in size, are expected to provide the most complete and dramatic imagery of a planetary landing in the history of exploration.

The mission also released a higher-resolution Hazcam image of their target, the mountain in the middle of Gale Crater informally titled Mount Sharp.

The new image, taken by Curiosity's black-and-white Hazard Avoidance Cameras - or Hazcams - can be found at: http://1.usa.gov/OLB3B5.

The mission is managed by JPL for NASA's Science Mission Directorate in Washington. The rover was designed, developed and assembled at JPL. Malin Space Science Systems, San Diego, provided MARDI, as well as three other cameras on Curiosity.

For more information on the mission, visit: http://www.nasa.gov/mars and http://marsprogram.jpl.nasa.gov/msl.