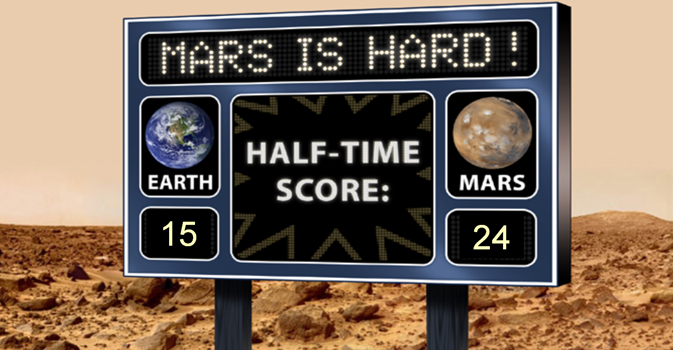 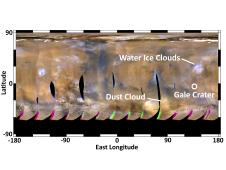 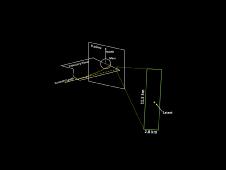 This graphic shows how navigators steering NASA's Mars Science Laboratory capsule — with the Curosity rover tucked inside — are aiming for a pinpoint location above Mars. Image credit: NASA/JPL-Caltech
› Full image and caption

PASADENA, Calif. – The gravitational tug of Mars is now pulling NASA's car-size geochemistry laboratory, Curiosity, in for a suspenseful landing in less than 40 hours.

"After flying more than eight months and 350 million miles since launch, the Mars Science Laboratory spacecraft is now right on target to fly through the eye of the needle that is our target at the top of the Mars atmosphere," said Mission Manager Arthur Amador of NASA's Jet Propulsion Laboratory, Pasadena, Calif.

The spacecraft is healthy and on course for delivering the mission's Curiosity rover close to a Martian mountain at 10:31 p.m. Sunday, Aug. 5 PDT (1:31 a.m. Monday, Aug. 6 EDT). That's the time a signal confirming safe landing could reach Earth, give or take about a minute for the spacecraft's adjustments to sense changeable atmospheric conditions.

The only way a safe-landing confirmation can arrive during that first opportunity is via a relay by NASA's Mars Odyssey orbiter. Curiosity will not be communicating directly with Earth as it lands, because Earth will set beneath the Martian horizon from Curiosity's perspective about two minutes before the landing.

"We are expecting Odyssey to relay good news," said Steve Sell of the JPL engineering team that developed and tested the mission's complicated "sky crane" landing system. "That moment has been more than eight years in the making."

Curiosity was approaching Mars at about 8,000 mph (about 3,600 meters per second) Saturday morning. By the time the spacecraft hits the top of Mars' atmosphere, about seven minutes before touchdown, gravity will accelerate it to about 13,200 mph (5,900 meters per second).

NASA plans to use Curiosity to investigate whether the study area has ever offered environmental conditions favorable for microbial life, including chemical ingredients for life.

"In the first few weeks after landing, we will be ramping up science activities gradually as we complete a series of checkouts and we gain practice at operating this complex robot in Martian conditions," said JPL's Richard Cook, deputy project manager for Curiosity.

The first Mars pictures expected from Curiosity are reduced-resolution fisheye black-and-white images received either in the first few minutes after touchdown or more than two hours later. Higher resolution and color images from other cameras could come later in the first week. Plans call for Curiosity to deploy a directional antenna on the first day after landing and raise the camera mast on the second day.

The big hurdle is landing. Under some possible scenarios, Curiosity could land safely, but temporary communication difficulties could delay for hours or even days any confirmation that the rover has survived landing.

The prime mission lasts a full Martian year, which is nearly two Earth years. During that period, researchers plan to drive Curiosity partway up a mountain informally called Mount Sharp. Observations from orbit have identified exposures there of clay and sulfate minerals that formed in wet environments.

The Mars Science Laboratory is a project of NASA’s Science Mission Directorate. The mission is managed by JPL, a division of the California Institute of Technology in Pasadena. Its rover, Curiosity, was designed, developed and assembled at JPL. Information about the mission and about ways to participate in challenges of the landing, including a new video game, is available at: http://www.nasa.gov/mars and http://mars.jpl.nasa.gov/msl/ .