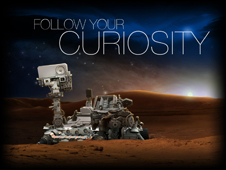 A "virtual rover experience" and a body-action video game are among the options for public participation in NASA's Mars Science Laboratory mission. Image credit: NASA/JPL-Caltech.
Click here to play along.

As NASA's Mars Rover Curiosity prepares to land on Mars, public audiences worldwide can take their own readiness steps to share in the adventure. Landing is scheduled for about 10:31 p.m. PDT on Aug. 5 (1:31 a.m. EDT on Aug. 6), at mission control inside NASA's Jet Propulsion Laboratory, Pasadena, Calif.

Martian fans can help NASA test-drive a new 3-D interactive experience that will allow the public to follow along with Curiosity's discoveries on Mars. Using Unity, a game development tool, NASA is pushing new limits by rendering high-resolution terrain maps of Gale Crater, Curiosity's landing site, collected from Mars orbiters. A 3-D "virtual rover" version of Curiosity will follow the path of the real rover as it makes discoveries.

By downloading Unity and trying out the experience early, the public can reduce potential download delays during landing and offer feedback on the pre-landing beta version of the experience. By crowd sourcing -- leveraging the wisdom and experience of citizens everywhere -- NASA can help ensure the best experience across individual users' varying computer systems.

"Technology is making it possible for the public to participate in exploration as they never have before," said Michelle Viotti, Mars public engagement manager at JPL. "Because Mars exploration is fundamentally a shared human endeavor, we want everyone around the globe to have the most immersive experience possible."

In collaboration with Microsoft, Corp., NASA has a number of forthcoming experiences geared for inspiration and learning in science, technology, engineering and mathematics (STEM). With Xbox, NASA is unveiling "Mars Rover Landing," an immersive experience for the Xbox 360 home entertainment console. The experience allows users to take control of their own spacecraft using Kinect and face the extreme challenges of landing a rover on Mars. The game will be hosted in the Xbox Live Marketplace and in a special destination on the Xbox Live dashboard dedicated to the Curiosity rover. The dashboard will also include pictures, video and more information about the mission.

Additionally, a new Mars experience in Kodu, which allows children to learn computational thinking by creating their own video games, is designed to help students learn about commanding a rover on a quest to make discoveries about whether Mars was ever a habitat, a place that supports life. Standards-aligned curricula for teachers will also bring these 21st-century computer skills directly into the classroom and into afterschool organizations supporting academic success and college readiness.

For quick access to discoveries on Mars as they happen, NASA's "Be A Martian" mobile application, initially developed with Microsoft for Windows Phone, will be available on Android and iPhone as well. NASA is also planning a series of Mars exploration apps for the upcoming Windows 8 PCs.

"We are very excited to be working with NASA to bring innovation and exploration into the home. We continue to believe that as industry leaders, we have vested interest in advancing science and technology education," said Walid Abu-Habda, corporate vice president, Developer & Platform Evangelism, at Microsoft. "We hope that through partnering on the Mars Rover experience, we spark interest and excitement among the next generation of scientists and technologists."

For a cool, immersive view of Mars Rover Curiosity and other spacecraft, space enthusiasts can also use their Apple iPhones to access a new augmented-reality experience that "projects" 3-D images of robotic explorers for first-hand, up-close inspection. For those wanting a live, community experience, museums and civic groups worldwide are hosting Curiosity landing events, often with big-screen experiences and public talks.

"Multiple partnerships united around science literacy can really make a difference in reaching and inspiring more people around the world," Viotti said. "NASA welcomes innovative collaborations that inspire lifelong learning and access to discovery and innovation."

The Mars Science Laboratory is a project of NASA's Science Mission Directorate. The mission is managed by JPL, a division of the California Institute of Technology in Pasadena. The mission's rover, Curiosity, was designed, developed and assembled at JPL.