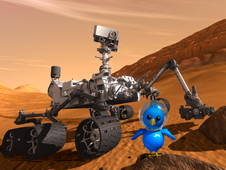 PASADENA, Calif. – NASA has invited 150 followers of the agency's Twitter account to a two-day launch Tweetup on Nov. 23 and 25 at the agency's Kennedy Space Center in Florida.

The Tweetup is expected to culminate in the launch of the Mars Science Laboratory's Curiosity rover aboard an Atlas V rocket from nearby Cape Canaveral Air Force Station.

The launch window is scheduled to open at 7:25 a.m. PST (10:25 a.m. EST) on Nov. 25. Curiosity's arrival at Mars' Gale Crater is anticipated in August 2012. During the nearly two-year prime mission, the rover will investigate whether a selected area of Mars offered environmental conditions favorable for microbial life and preserved that evidence, if it existed.

Tweetup participants were selected from more than 1,050 people who registered online. They will share their Tweetup experiences with their followers through the social networking site Twitter and other online forums.

Beginning at 8 a.m. PST (11 a.m. EST) on Wednesday, Nov. 23, NASA will broadcast a portion of the Tweetup when attendees talk with Jim Green, Planetary Science division director, and Doug McCuistion, Mars Exploration program director, both from NASA Headquarters in Washington. Engineers from NASA's Jet Propulsion Laboratory, Pasadena, Calif., where the rover was designed and built, will speak, as will mission scientists.

To watch the launch broadcast, visit: http://www.ustream.tv/channel/nasa-tweetup . The broadcast with live chat will begin at 6:30 a.m. PST (9:30 a.m. EST) on http://ustream.tv/nasajpl .

For more information about the Mars Curiosity rover, visit: http://www.nasa.gov/msl and http://mars.jpl.nasa.gov/msl/ .

To connect with NASA on Twitter and other social networking sites, visit: http://www.nasa.gov/connect .