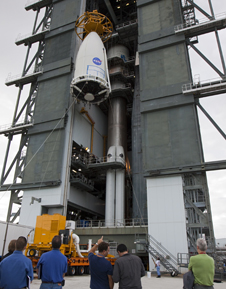 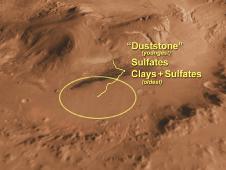 This oblique view of Gale Crater shows the landing site and the mound of layered rocks that NASA's Mars Science Laboratory will investigate. The landing site is in the smooth area in front of the mound. Image credit: NASA/JPL-Caltech/ASU/UA
› Full image and caption 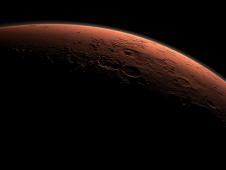 This computer-generated view depicts part of Mars at the boundary between darkness and daylight, with an area including Gale Crater beginning to catch morning light. Image credit: NASA/JPL-Caltech
› Full image and caption

The launch of NASA’s Mars Science Laboratory has been delayed one day to allow time for the team to remove and replace a flight termination system battery. The launch is rescheduled for Saturday, Nov. 26 from Cape Canaveral Air Force Station, Florida. The one hour and 43 minute launch window opens at 7:02 a.m. PST (10:02 a.m. EST).

PASADENA, Calif. -- NASA's most advanced mobile robotic laboratory, which will examine one of the most intriguing areas on Mars, is in final preparations for a launch from Florida's Space Coast at 10:25 a.m. EST (7:25 a.m. PST) on Nov. 25.

The Mars Science Laboratory mission will carry Curiosity, a rover with more scientific capability than any ever sent to another planet. The rover is now sitting atop an Atlas V rocket awaiting liftoff from Cape Canaveral Air Force Station.

"Preparations are on track for launching at our first opportunity," said Pete Theisinger, Mars Science Laboratory project manager at NASA's Jet Propulsion Laboratory in Pasadena, Calif. "If weather or other factors prevent launching then, we have more opportunities through Dec. 18."

Scheduled to land on the Red Planet in August 2012, the one-ton rover will examine Gale Crater during a nearly two-year prime mission. Curiosity will land near the base of a layered mountain 3 miles (5 kilometers) high inside the crater. The rover will investigate whether environmental conditions ever have been favorable for development of microbial life and preserved evidence of those conditions.

"Gale gives us a superb opportunity to test multiple potentially habitable environments and the context to understand a very long record of early environmental evolution of the planet," said John Grotzinger, project scientist for the Mars Science Laboratory at the California Institute of Technology in Pasadena. "The portion of the crater where Curiosity will land has an alluvial fan likely formed by water-carried sediments. Layers at the base of the mountain contain clays and sulfates, both known to form in water."

Curiosity is twice as long and five times as heavy as earlier Mars rovers Spirit and Opportunity. The rover will carry a set of 10 science instruments weighing 15 times as much as its predecessors' science payloads.

A mast extending to 7 feet (2.1 meters) above ground provides height for cameras and a laser-firing instrument to study targets from a distance. Instruments on a 7-foot-long (2.1-meter-long) arm will study targets up close. Analytical instruments inside the rover will determine the composition of rock and soil samples acquired with the arm's powdering drill and scoop. Other instruments will characterize the environment, including the weather and natural radiation that will affect future human missions.

"Mars Science Laboratory builds upon the improved understanding about Mars gained from current and recent missions," said Doug McCuistion, director of the Mars Exploration Program at NASA Headquarters in Washington. "This mission advances technologies and science that will move us toward missions to return samples from, and eventually send humans to, Mars."

The mission is challenging and risky. Because Curiosity is too heavy to use an air-bag cushioned touchdown, the mission will use a new landing method, with a rocket-powered descent stage lowering the rover on a tether like a kind of sky-crane.

The mission will pioneer precision landing methods during the spacecraft's crucial dive through Mars' atmosphere next August to place the rover onto a smaller landing target than any previously for a Mars mission. The target inside Gale Crater is 12.4 miles (20 kilometers) by 15.5 miles (25 kilometers). Rough terrain just outside that area would have disqualified the landing site without the improved precision.

No mission to Mars since the Viking landers in the 1970s has sought a direct answer to the question of whether life has existed on Mars. Curiosity is not designed to answer that question by itself, but its investigations for evidence about prerequisites for life will steer potential future missions toward answers.

The mission is managed by JPL for NASA's Science Mission Directorate in Washington. Curiosity was designed, developed and assembled at JPL. Launch management for the mission is the responsibility of NASA's Launch Services Program at the Kennedy Space Center in Florida. NASA's Space Network, managed by the Goddard Space Flight Center in Greenbelt, Md., will provide space communications services for the rocket. NASA's international Deep Space Network will provide MSL spacecraft acquisition and communication throughout the mission.