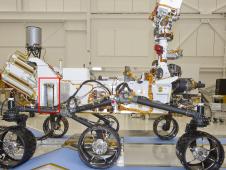 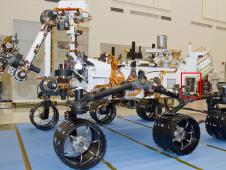 An instrument on NASA's Mars rover Curiosity can check for any water that might be bound into shallow underground minerals along the rover's path.

"If we conclude that there is something unusual in the subsurface at a particular spot, we could suggest more analysis of the spot using the capabilities of other instruments," said this instrument's principal investigator, Igor Mitrofanov of the Space Research Institute, Russia.

The Mars Science Laboratory mission will use 10 instruments on Curiosity to investigate whether the area selected for the mission has ever offered environmental conditions favorable for life and favorable for preserving evidence about life.

"The strength of Mars Science Laboratory is the combination of all the instruments together," Mitrofanov added.

The Dynamic Albedo of Neutrons instrument, or DAN, will scout for underground clues to a depth of about 20 inches (50 centimeters). The Russian Federal Space Agency contributed it to NASA as part of a broad collaboration between the United States and Russia in the exploration of space. Sergey Saveliev, deputy head of the Russian Federal Space Agency, emphasized that the cooperation on this project serves as a continuation of the joint activities associated with the study of Mars to enhance the scientific return to the international community in the areas of Mars exploration and Mars knowledge. The accommodation and integration of the Russian DAN in the U.S. Mars Science Laboratory flight and mission systems give evidence of strengthening cooperation between the two countries in space endeavors.

DAN will bring to the surface of Mars an enhancement of nuclear technology that has already detected Martian water from orbit. "Albedo" in the instrument's name means reflectance -- in this case, how original high-energy neutrons injected into the ground bounce off atomic nuclei in the ground. Neutrons that collide with hydrogen atoms bounce off with a characteristic decrease in energy, similar to how one billiard ball slows after colliding with another. By measuring the energies of the neutrons leaking from the ground, DAN can detect the fraction that was slowed in these collisions, and therefore the amount of hydrogen.

Oil prospectors use this technology in instruments lowered down exploration holes to detect the hydrogen in petroleum. Space explorers have adapted it for missions to the moon and Mars, where most hydrogen is in water ice or in water-derived hydroxyl ions.

Mitrofanov is the principal investigator for a Russian instrument on NASA's Mars Odyssey orbiter, the high-energy neutron detector (HEND), which measures high energy of neutrons coming from Mars. In 2002, it and companion instruments on Odyssey detected hydrogen interpreted as abundant underground water ice close to the surface at high latitudes. That discovery led to NASA's Phoenix Mars Lander going to far northern Mars in 2008 and confirming the presence of water ice.

"You can think of DAN as a reconnaissance instrument," Mitrofanov said. Just as Phoenix investigated what Odyssey detected, Curiosity can use various tools to investigate what DAN detects. The rover has a soil scoop and can also dig with its wheels. Its robotic arm can put samples into instruments inside the rover for thorough analyses of ingredients. Rock formations that Curiosity's cameras view at the surface can be traced underground with DAN, enhancing the ability of scientists to understand the geology.

The neutron detectors on Odyssey rely on galactic cosmic rays hitting Mars as a source of neutrons. DAN can work in a passive mode relying on cosmic rays, but it also has its own pulsing neutron generator for an active mode of shooting high-energy neutrons into the ground. In active mode, it is sensitive enough to detect water content as low as one-tenth of one percent in the ground beneath the rover.

The neutron generator is mounted on Curiosity's right hip. A module with two neutron detectors is mounted on the left hip. With pulses lasting about one microsecond and repeated as frequently as 10 times per second, key measurements by the detectors are the flux rate and delay time of moderated neutrons with different energy levels returning from the ground. The generator will be able to emit a total of about 10 million pulses during the mission, with about 10 million neutrons at each pulse.

"We have a fixed number of about 10 million shots, so one major challenge is to determine our strategy for how we will use them," said Maxim Litvak, leading scientist of the DAN investigation from the Space Research Institute.

Operational planning anticipates using DAN during short pauses in drives and while the rover is parked. It will check for any changes or trends in subsurface hydrogen content, from place to place along the traverse. Because there is a low possibility for underground water ice at Curiosity's Gale crater landing site, the most likely form of hydrogen in the ground of the landing area is hydrated minerals. These are minerals with water molecules or hydroxyl ions bound into the crystalline structure of the mineral. They can tenaciously retain water from a wetter past when all free water has gone.

Mars Science Laboratory Project Scientist John Grotzinger of the California Institute of Technology in Pasadena said, "DAN will provide the ability to detect hydrated minerals or water ice in the shallow subsurface, which provides immediate clues as to how the geology of the subsurface might guide exploration of the surface. In addition, DAN can tell us how the shallow subsurface may differ from what the rover sees at the surface. None of our other instruments have the ability to do this. DAN measurements will tell us about the habitability potential of subsurface rocks and soils -- whether they contain water -- and as we drive along, DAN may help us understand what kinds of rocks are under the soils we drive across."

Information from DAN will also provide a ground-truth calibration for the measurements that the gamma-ray and neutron detectors on Odyssey have made and continue to make, all around the planet, enhancing the value of that global data set. The team leader of Odyssey's gamma-ray spectrometer suite, William Boynton of the University of Arizona in Tucson, is a co-investigator on the DAN investigation, with the major responsibility to provide DAN data products to NASA's Planetary Data System for usage by scientists everywhere.

Besides heading the team that developed and will operate DAN, Mitrofanov is the principal investigator for a passive neutron-detector instrument to check for hydrated minerals on Mars' moon Phobos as part of the Phobos Soil Return mission that Russia plans to launch in November 2011. "Measurements by DAN on the Mars surface will be useful for the interpretation of Phobos data," he said.

The Mars Science Laboratory is managed by JPL, a division of the California Institute of Techology, Pasadena. For more information on the mission, visit http://www.nasa.gov/msl and http://mars.jpl.nasa.gov/msl/ .