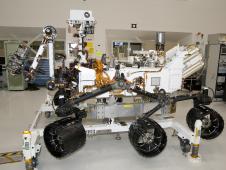 Assembly and testing of NASA's Mars Science Laboratory spacecraft is far enough along that the mission's rover, Curiosity, looks very much as it will when it is investigating Mars.

Testing continues this month at NASA's Jet Propulsion Laboratory, Pasadena, Calif., on the rover and other components of the spacecraft that will deliver Curiosity to Mars. In May and June, the spacecraft will be shipped to NASA Kennedy Space Center, Fla., where preparations will continue for launch in the period between Nov. 25 and Dec. 18, 2011.

The mission will use Curiosity to study one of the most intriguing places on Mars -- still to be selected from among four finalist landing-site candidates. It will study whether a selected area of Mars has offered environmental conditions favorable for microbial life and for preserving evidence about whether Martian life has existed.

JPL, a division of the California Institute of Technology in Pasadena, manages the Mars Science Laboratory mission for the NASA Science Mission Directorate, Washington. For more information about the mission, visit http://www.nasa.gov/msl .