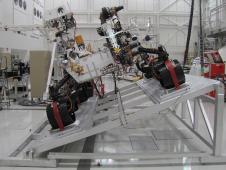 The NASA rover to be launched to Mars this year will carry the Mast Camera (Mastcam) instrument already on the vehicle, providing the capability to meet the mission's science goals.

Work has stopped on an alternative version of the instrument, with a pair of zoom-lens cameras, which would have provided additional capabilities for improved three-dimensional video. The installed Mastcam on the Mars Science Laboratory mission's Curiosity rover uses two fixed-focal-length cameras: a telephoto for one eye and wider angle for the other. Malin Space Science Systems, San Diego, built the Mastcam and was funded by NASA last year to see whether a zoom version could be developed in time for testing on Curiosity.

"With the Mastcam that was installed last year and the rover's other instruments, Curiosity can accomplish its ambitious research goals," said Mars Science Laboratory Project Scientist John Grotzinger, of the California Institute of Technology, Pasadena. "Malin Space Science Systems has provided excellent, unprecedented science cameras for this mission. The possibility for a zoom-camera upgrade was very much worth pursuing, but time became too short for the levels of testing that would be needed for them to confidently replace the existing cameras. We applaud Malin Space Science Systems for their tremendous effort to deliver the zooms, and also the Mars Science Laboratory Project's investment in supporting this effort."

Malin Space Science Systems has also provided the Mars Hand Lens Imager and the Mars Descent Imager instruments on Curiosity. The company will continue to pursue development of the zoom system, both to prove out the design and to make the hardware available for possible use on future missions.

"While Curiosity won't benefit from the 3D motion imaging that the zooms enable, I'm certain that this technology will play an important role in future missions," said Mastcam Co-Investigator James Cameron. "In the meantime, we're certainly going to make the most of our cameras that are working so well on Curiosity right now."

Mastcam Principal Investigator Michael Malin said, "Although we are very disappointed that the zoom cameras will not fly, we expect the fixed-focal-length cameras to achieve all of the primary science objectives of the Mastcam investigation."

The rover and other parts of the Mars Science Laboratory spacecraft are in testing at NASA's Jet Propulsion Laboratory, Pasadena, Calif., which manages the project for the NASA Science Mission Directorate, Washington. The spacecraft will be delivered to NASA Kennedy Space Center in Florida in coming months for launch late this year. In August 2012, Curiosity will land on Mars for a two-year mission to examine whether conditions in the landing area have been favorable for microbial life and for preserving evidence about whether life has existed there.