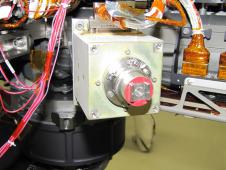 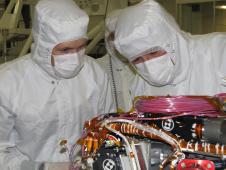 NASA's Mars Science Laboratory rover, Curiosity, will carry a next generation, onboard "chemical element reader" to measure the chemical ingredients in Martian rocks and soil. The instrument is one of 10 that will help the rover in its upcoming mission to determine the past and present habitability of a specific area on the Red Planet. Launch is scheduled between Nov. 25 and Dec. 18, 2011, with landing in August 2012.

The Alpha Particle X-Ray Spectrometer (APXS) instrument, designed by physics professor Ralf Gellert of the University of Guelph in Ontario, Canada, uses the power of alpha particles, or helium nuclei, and X-rays to bombard a target, causing the target to give off its own characteristic alpha particles and X-ray radiation. This radiation is "read by" an X-ray detector inside the sensor head, which reveals which elements and how much of each are in the rock or soil.

Identifying the elemental composition of lighter elements such as sodium, magnesium or aluminum, as well as heavier elements like iron, nickel or zinc, will help scientists identify the building blocks of the Martian crust. By comparing these findings with those of previous Mars rover findings, scientists can determine if any weathering has taken place since the rock formed ages ago.

All NASA Mars rovers have carried a similar instrument – Pathfinder's rover Sojourner, Spirit and Opportunity, and now Curiosity, too. Improvements have been made with each generation, but the basic design of the instrument has remained the same.

"APXS was modified for Mars Science Laboratory to be faster so it could make quicker measurements. On the Mars Exploration Rovers [Spirit and Opportunity] it took us five to 10 hours to get information that we will now collect in two to three hours," said Gellert, the intrument's principal investigator. "We hope this will help us to investigate more samples."

The main electronics portion of the tissue-box-sized instrument lives in the rover's body, while the sensor head, the size of a soft drink can, is mounted on the robotic arm. With the help of Curiosity’s remote sensing instruments – the Chemistry and Camera (ChemCam) instrument and the Mastcam – the rover team will decide where to drive Curiosity for a closer look with the instruments, including APXS. Measurements are taken with the APXS by deploying the sensor head to make direct contact with the desired sample.

The rover’s brush will be used to remove dust from rocks to prepare them for inspection by APXS and by MAHLI, the rover’s arm-mounted, close-up camera. Whenever promising samples are found, the rover will then use its drill to extract a few grains and feed them into the rover’s analytical instruments, SAM and CheMin, which will then make very detailed mineralogical and other investigations.

Scientists will use information from APXS and the other instruments to find the interesting spots and to figure out the present and past environmental conditions that are preserved in the rocks and soils.

"The rovers have answered a lot of questions, but they've also opened up new questions," said Gellert. "Curiosity was designed to pick up where Spirit and Opportunity left off."

For more information about the mission, visit http://mars.jpl.nasa.gov/msl/ . To watch the spacecraft being assembled and tested, visit http://www.ustream.tv/nasajpl .

The MSL APXS is funded by the Canadian Space Agency, with MDA Corporation as prime subcontractor to build the instrument. Funding for the science team comes from CSA, NASA, and the University of Guelph.