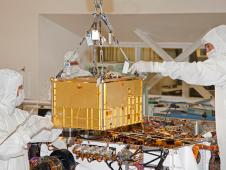 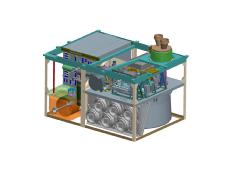 This schematic illustration shows major components of the microwave-oven-size instrument, which was installed into the mission's rover, Curiosity, in January 2011. Image credit NASA
› Full image and caption 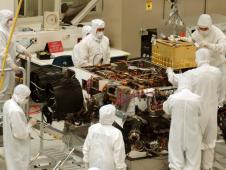 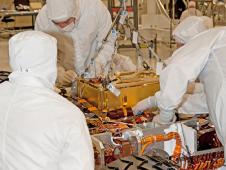 PASADENA, Calif. -- Paul Mahaffy, the scientist in charge of the largest instrument on NASA's next Mars rover, watched through glass as clean-room workers installed it into the rover.

The specific work planned for this instrument on Mars requires more all-covering protective garb for these specialized workers than was needed for the building of NASA's earlier Mars rovers.

The instrument is Sample Analysis at Mars, or SAM, built by NASA's Goddard Space Flight Center, Greenbelt, Md. At the carefully selected landing site for the Mars rover named Curiosity, one of SAM's key jobs will be to check for carbon-containing compounds called organic molecules, which are among the building blocks of life on Earth. The clean-room suits worn by Curiosity's builders at NASA's Jet Propulsion Laboratory, Pasadena, Calif., are just part of the care being taken to keep biological material from Earth from showing up in results from SAM.

Organic chemicals consist of carbon and hydrogen and, in many cases, additional elements. They can exist without life, but life as we know it cannot exist without them. SAM can detect a fainter trace of organics and identify a wider variety of them than any instrument yet sent to Mars. It also can provide information about other ingredients of life and clues to past environments.

Researchers will use SAM and nine other science instruments on Curiosity to study whether one of the most intriguing areas on Mars has offered environmental conditions favorable for life and favorable for preserving evidence about whether life has ever existed there. NASA will launch Curiosity from Florida between Nov. 25 and Dec. 18, 2011, as part of the Mars Science Laboratory mission's spacecraft. The spacecraft will deliver the rover to the Martian surface in August 2012. The mission plan is to operate Curiosity on Mars for two years.

"If we don't find any organics, that's useful information," said Mahaffy, of NASA's Goddard Space Flight Center. "That would mean the best place to look for evidence about life on Mars may not be near the surface. It may push us to look deeper." It would also aid understanding of the environmental conditions that remove organics.

"If we do find detectable organics, that would be an encouraging sign that the immediate environment in the rocks we're sampling is preserving these clues," he said. "Then we would use the tools we have to try to determine where the organics may have come from." Organics delivered by meteorites without involvement of biology come with more random chemical structures than the patterns seen in mixtures of organic chemicals produced by organisms.

Mahaffy paused in describing what SAM will do on Mars while engineers and technicians lowered the instrument into its position inside Curiosity this month. A veteran of using earlier spacecraft instruments to study planetary atmospheres, he has coordinated work of hundreds of people in several states and Europe to develop, build and test SAM after NASA selected his team's proposal for it in 2004.

"It has been a long haul getting to this point," he said. "We've taken a set of experiments that would occupy a good portion of a room on Earth and put them into that box the size of a microwave oven."

SAM has three laboratory tools for analyzing chemistry. The tools will examine gases from the Martian atmosphere, as well as gases that ovens and solvents pull from powdered rock and soil samples. Curiosity's robotic arm will deliver the powdered samples to an inlet funnel. SAM's ovens will heat most samples to about 1,000 degrees Celsius (about 1,800 degrees Fahrenheit).

One tool, a mass spectrometer, identifies gases by the molecular weight and electrical charge of their ionized states. It will check for several elements important for life as we know it, including nitrogen, phosphorous, sulfur, oxygen and carbon.

Another tool, a laser spectrometer, uses absorption of light at specific wavelengths to measure concentrations of selected chemicals, such as methane and water vapor. It also identifies the proportions of different isotopes in those gases. Isotopes are variants of the same element with different atomic weights, such as carbon-13 and carbon-12, or oxygen-18 and oxygen-16. Ratios of isotopes can be signatures of planetary processes. For example, Mars once had a much denser atmosphere than it does today, and if the loss occurred at the top of the atmosphere, the process would favor increased concentration of heavier isotopes in the retained, modern atmosphere.

Methane is an organic molecule. Observations from Mars orbit and from Earth in recent years have suggested transient methane in Mars' atmosphere, which would mean methane is being actively added and subtracted at Mars. With SAM's laser spectrometer, researchers will check to confirm whether methane is present, monitor any changes in concentration, and look for clues about whether Mars methane is produced by biological activity or by processes that do not require life. JPL provided SAM's laser spectrometer.

SAM's third analytical tool, a gas chromatograph, separates different gases from a mixture to aid identification. It does some identification itself and also feeds the separated fractions to the mass spectrometer and the laser spectrometer. France's space agency, Centre National d'Études Spatiales, provided support to the French researchers who developed SAM's gas chromatograph.

NASA's investigation of organics on Mars began with the twin Viking landers in 1976. Science goals of more recent Mars missions have tracked a "follow the water" theme, finding multiple lines of evidence for liquid water -- another prerequisite for life -- in Mars' past. The Mars Science Laboratory mission will seek more information about those wet environments, while the capabilities of its SAM instrument add a trailblazing "follow the carbon" aspect and information about how well ancient environments may be preserved.

The original reports from Viking came up negative for organics. How, then, might Curiosity find any? Mahaffy describes three possibilities.

The first is about locations. Mars is diverse, not uniform. Copious information gained from Mars orbiters in recent years is enabling the choice of a landing site with favorable attributes, such as exposures of clay and sulfate minerals good at entrapping organic chemicals. Mobility helps too, especially with the aid of high-resolution geologic mapping generated from orbital observations. The stationary Viking landers could examine only what their arms could reach. Curiosity can use mapped geologic context as a guide in its mobile search for organics and other clues about habitable environments. Additionally, SAM will be able to analyze samples from interiors of rocks drilled into by Curiosity, rather than being restricted to soil samples, as Viking was.

Second, SAM has improved sensitivity, with a capability to detect less than one part-per-billion of an organic compound, over a wider mass range of molecules and after heating samples to a higher temperature.

Third, a lower-heat method using solvents to pull organics from some SAM samples can check a hypothesis that a reactive chemical recently discovered in Martian soil may have masked organics in soil samples baked during Viking tests.

The lower-heat process also allows searching for specific classes of organics with known importance to life on Earth. For example, it can identify amino acids, the chain links of proteins. Other clues from SAM could also be hints about whether organics on Mars -- if detected at all -- come from biological processes or without biology, such as from meteorites. Certain carbon-isotope ratios in organics compared with the ratio in Mars' atmosphere could suggest meteorite origin. Patterns in the number of carbon atoms in organic molecules could be a clue. Researchers will check for a mixture of organics with chains of carbon atoms to see if the mix is predominated either by chains with an even number of carbon atoms or with an odd number. That kind of pattern, rather than a random blend, would be typical of biological assembly of carbon chains from repetitious subunits.

"Even if we see a signature such as mostly even-numbered chains in a mix of organics, we would be hesitant to make any definitive statements about life, but that would certainly indicate that our landing site would be a good place to come back to," Mahaffy said. A future mission could bring a sample back to Earth for more extensive analysis with all the methods available on Earth.