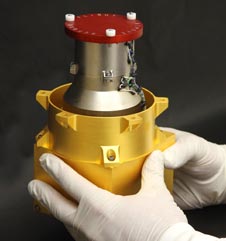 This instrument, shown prior to its September 2010 installation onto NASA's Mars rover Curiosity, will aid future human missions to Mars by providing information about the radiation environment on Mars and on the way to Mars. Image credit NASA/JPL-Caltech/SwRI
› Full image and caption
› Curiosity Cam


About eight months before the NASA rover Curiosity touches down on Mars in August 2012, the mission's science measurements will begin much closer to Earth.

The Mars Science Laboratory mission's Radiation Assessment Detector, or RAD, will monitor naturally occurring radiation that can be unhealthful if absorbed by living organisms. It will do so on the surface of Mars, where there has never before been such an instrument, as well as during the trip between Mars and Earth.

RAD's measurements on Mars will help fulfill the mission's key goals of assessing whether Curiosity's landing region on Mars has had conditions favorable for life and for preserving evidence about life. This instrument also will do an additional job. Unlike any of the nine others in this robotic mission's science payload, RAD has a special task and funding from the part of NASA that is planning human exploration beyond Earth orbit. It will aid design of human missions by reducing uncertainty about how much shielding from radiation future astronauts will need. The measurements between Earth and Mars, as well as the measurements on Mars, will serve that purpose.

"No one has fully characterized the radiation environment on the surface of another planet. If we want to send humans there, we need to do that," said RAD Principal Investigator Don Hassler of the Boulder, Colo., branch of the Southwest Research Institute.

Whether the first destination for human exploration beyond the moon is an asteroid or Mars, the travelers will need protection from the radiation environment in interplanetary space. Hassler said, "The measurements we get during the cruise from Earth to Mars will help map the distribution of radiation throughout the solar system and be useful in mission design for wherever we send astronauts."

RAD will monitor high-energy atomic and subatomic particles coming from the sun, from distant supernovas and from other sources. These particles constitute the radiation that could be harmful to any microbes near the surface of Mars or to astronauts on a Mars mission. Galactic cosmic rays, coming from supernova explosions and other events extremely far from our own solar system, are a variable shower of charged particles. In addition, the sun itself spews electrons, protons and heavier ions in "solar particle events" fed by solar flares and ejections of matter from the sun's corona. Astronauts might need to move into havens with extra shielding on an interplanetary spacecraft or on Mars during solar particle events.

Earth's magnetic field and atmosphere provide effective shielding for our home planet against the possible deadly effects of galactic cosmic rays and solar particle events. Mars, though, lacks a global magnetic field and has only about one percent as much atmosphere as Earth. Just to find high-enough radiation levels on Earth for checking and calibrating RAD, the instrument team needed to put it inside major particle-accelerator research facilities in the United States, Europe, Japan and South Africa.

An instrument on NASA's Mars Odyssey orbiter, which reached Mars in 2001, assessed radiation levels above the Martian atmosphere. Current estimates of the radiation environment at the planet's surface rely on modeling of how the thin atmosphere affects the energetic particles, but uncertainty in the modeling remains large. "A single energetic particle hitting the top of the atmosphere can break up into many particles -- a cascade of lower-energy particles that might be more damaging to life than a single high-energy particle," Hassler noted.

The 1.7-kilogram (3.8-pound) RAD instrument has an upward-pointing, wide-angle telescope with detectors for charged particles with masses up to that of iron. It can also detect secondary neutrons coming from both the Mars atmosphere above and Mars surface material below. Hassler's international RAD team includes experts in instrument design, astronaut safety, atmospheric science, geology and other fields.

RAD measurements during the trip from Earth to Mars will enable correlations with instruments on other spacecraft that monitor solar particle events and galactic cosmic rays in Earth's neighborhood, then will yield data about the radiation environment farther from Earth.

Once on Mars, the rover's prime mission will last a full Martian year -- nearly two Earth years. A one-time set of measurements by RAD would not suffice for determining the radiation environment on the surface, because radiation levels vary on time frames both longer than a year and shorter than an hour. Operational planning for Curiosity anticipates that RAD will record measurements for 15 minutes of every hour throughout the prime mission.

Radiation levels probably make the surface of modern Mars inhospitable for microbial life. The measurements from RAD will feed calculations of how deeply a possible future robot on a life-detection mission might need to dig or drill to reach a microbial safe zone. For assessing whether the surface radiation environment could have been hospitable for microbes in Mars' distant past, researchers will combine RAD's measurements with estimates of how the activity of the sun and the atmosphere of Mars have changed in the past few billion years.

"The primary science goal of Curiosity is to determine whether its landing site is, or ever was, a habitable environment, a place friendly to life," said JPL's Ashwin Vasavada, deputy project scientist for the Mars Science Laboratory. "That involves looking both for conditions that would support life as well as for those that would be hazardous to life or its chemical predecessors. Natural, high-energy radiation is just such a hazard, and RAD will give us the first look at the present level of this radiation and help us to better estimate radiation levels throughout Mars' history."

JPL, a division of the California Institute of Technology in Pasadena, manages the Mars Science Laboratory Project for NASA's Science Mission Directorate, Washington. For more information about the mission, see http://mars.jpl.nasa.gov/msl/ .