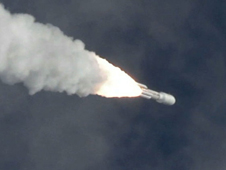 NASA's Mars Science Laboratory soars through the sky aboard an Atlas V rocket. It will arrive at Mars on August 6, 2012, Universal Time. Image credit: NASA/JPL-Caltech 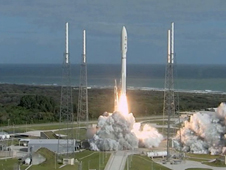 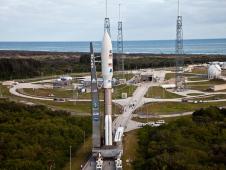 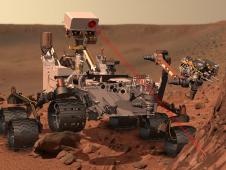 - Engineers have received data from NASA's Mars Science Laboratory showing that all systems are operating normally. The approximately eight-month journey to Mars is underway.

- NASA's Mars Science Laboratory has separated from the rocket that boosted it toward Mars and has sent a signal to Earth.

- NASA's Mars Science Laboratory and its rocket are coasting in orbit around Earth before heading to Mars.

- NASA's Mars Science Laboratory and its Curiosity rover have blasted off on an Atlas V rocket from Cape Canaveral Air Force Station in Florida.

The spacecraft, which will arrive at Mars in August 2012, is equipped with the most advanced rover ever to land on another planet. Named Curiosity, the rover will investigate whether the landing region has had environmental conditions favorable for supporting microbial life, and favorable for preserving clues about whether life existed.

If the spacecraft lifts off at the start of the launch window on Nov. 26, the following milestones are anticipated. Times would vary for other launch times and dates.

--The nose cone, or fairing, carrying Mars Science Laboratory will open like a clamshell and fall away at about three minutes and 25 seconds after launch. After this, the rocket's first stage will cut off and then drop into the Atlantic Ocean.

--The rocket's second stage, a Centaur engine, is started for the first time at about four minutes and 38 seconds after launch. After it completes its first burn of about 7 minutes, the rocket will be in a parking orbit around Earth at an altitude that varies from 102 miles (165 kilometers) to 201 miles (324 kilometers). It will remain there from 14 to 30 minutes, depending on the launch date and time. If launch occurs at the beginning of the launch Nov. 26 launch window, this stage will last about 21 minutes.

On the Way to Mars

-- The second Centaur burn, continuing for nearly 8 minutes (for a launch at the opening of the Nov. 26 launch window), lofts the spacecraft out of Earth orbit and sends it toward Mars.

--Mars Science Laboratory will separate from the rocket that boosted it toward Mars at about 44 minutes after launch, if launch occurs at the opening of the Nov. 26 window. Shortly after that, the separated Centaur performs its last task, an avoidance maneuver taking itself out of the spacecraft's flight path to avoid hitting either the spacecraft or Mars.

Sending a Message of Good Health

--Once the spacecraft is in its cruise stage toward Mars, it can begin communicating with Earth via an antenna station in Canberra, Australia, part of NASA's Deep Space Network. Engineers expect to hear first contact from the spacecraft at about 55 minutes after launch and assess the spacecraft's health during the subsequent 30 minutes. The spacecraft will arrive at the Red Planet Aug. 6, 2012, Universal Time (evening of Aug. 5, 2012, PDT).