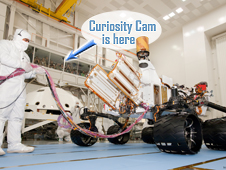 
PASADENA, Calif. -- More than one million people have watched assembly and testing of NASA's next Mars rover via a live webcam since it went online in October.

NASA's Mars Science Laboratory, also known as the Curiosity rover, is being tested and assembled in a clean room at the agency's Jet Propulsion Laboratory in Pasadena, Calif. The webcam, affectionately dubbed "Curiosity Cam," shows engineers and technicians clad in head-to-toe white smocks working on the rover.

Metrics from the webcam's hosting platform, Ustream, showed more than one million unique viewers spent more than 400,000 hours watching Curiosity Cam between Oct. 21 and Nov. 23. There have been more than 2.3 million viewer sessions.

The camera is mounted in the viewing gallery of the Spacecraft Assembly Facility at JPL. While the gallery is a regular stop on JPL's public tour, Curiosity Cam allows visitors from around the world to see NASA engineers at work without traveling to Pasadena.

Viewers from Chile, Japan, Turkey, Spain, Mexico and the United Kingdom have sent good wishes and asked questions in the chat box that accompanies the Curiosity Cam webstream. At scheduled times, viewers can interact with each other and JPL staff. The chat schedule is updated weekdays at http://www.ustream.tv/nasajpl .

Months of assembly and testing remain before the car-sized rover is ready for launch from Cape Canaveral, Fla. The rover and spacecraft components will ship to NASA's Kennedy Space Center in Florida next spring. The launch will occur between Nov. 25 and Dec. 18, 2011. Curiosity will arrive on Mars in August 2012.

The rover is one of the most technologically challenging interplanetary missions ever designed. Curiosity is engineered to drive longer distances over rougher terrain than previous Mars rovers. It will carry a science payload 10 times the mass of instruments on NASA's Spirit and Opportunity rovers. Curiosity will investigate whether the landing region had environments favorable for supporting microbial life. It will also look for environments that have been favorable for preserving evidence about whether life existed.

For information and news about Curiosity, visit http://www.nasa.gov/msl .