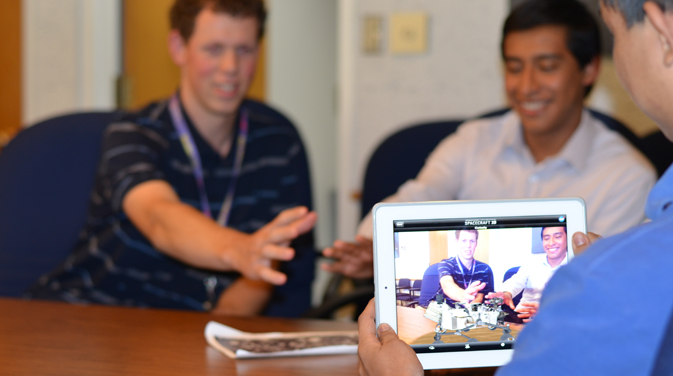 With augmented reality app Spacecraft 3D, you can get up close and personal with some of NASA’s heroes of robotic exploration. Image credit: NASA/JPL-Caltech › Larger view

PASADENA, Calif. -- A NASA-created application that brings some of the agency's robotic spacecraft to life in 3-D now is available for free on the iPhone and iPad.

Called Spacecraft 3D, the app uses animation to show how spacecraft can maneuver and manipulate their outside components. Presently, the new app features two NASA missions, the Curiosity rover that will touch down on Mars on Aug. 5 at 10:31 p.m. PDT (Aug. 6 at 1:31 a.m. EDT), and the twin GRAIL spacecraft, Ebb and Flow, currently orbiting the moon.

"With Spacecraft 3D and a mobile device, you can put high definition, three-dimensional models literally into the hands of kids of all ages," said Stephen Kulczycki, deputy director for communications and education at NASA's Jet Propulsion Laboratory in Pasadena, Calif.

Spacecraft 3D is among the first of what are known as augmented-reality apps for Apple devices. Augmented reality provides users a view of a real-world environment where elements are improved by additional input. Spacecraft 3D uses the iPhone or iPad camera to overlay information on the device's main screen. The app instructs users to print an augmented-reality target on a standard sheet of paper. When the device's camera is pointed at the target, the spacecraft chosen by the user materializes on screen.

"Let's say you want to get an idea what our Curiosity Mars rover is all about," said Kevin Hussey, manager of visualization technology at JPL. "Like Hollywood directors sizing up their next shot, you move your camera-equipped iPad or iPhone in and out, up and down, and the spacecraft perspective moves with you. It is a great way to study the 3-D nature of NASA spacecraft."

Spacecraft 3D also has a feature where you can take your own augmented-reality picture of the rover or GRAIL spacecraft. You can even make a self-portrait with a spacecraft, putting yourself or someone else in the picture.

Spacecraft 3D currently is available only for Apple formats, but should be available on other formats in the near future.

For more information about Eyes on the Solar System and NASA robotic missions, visit: http://solarsystem.nasa.gov/eyes/ .

For information on the GRAIL mission, visit: http://www.nasa.gov/grail .

For information on Curiosity, visit: http://www.nasa.gov/msl .