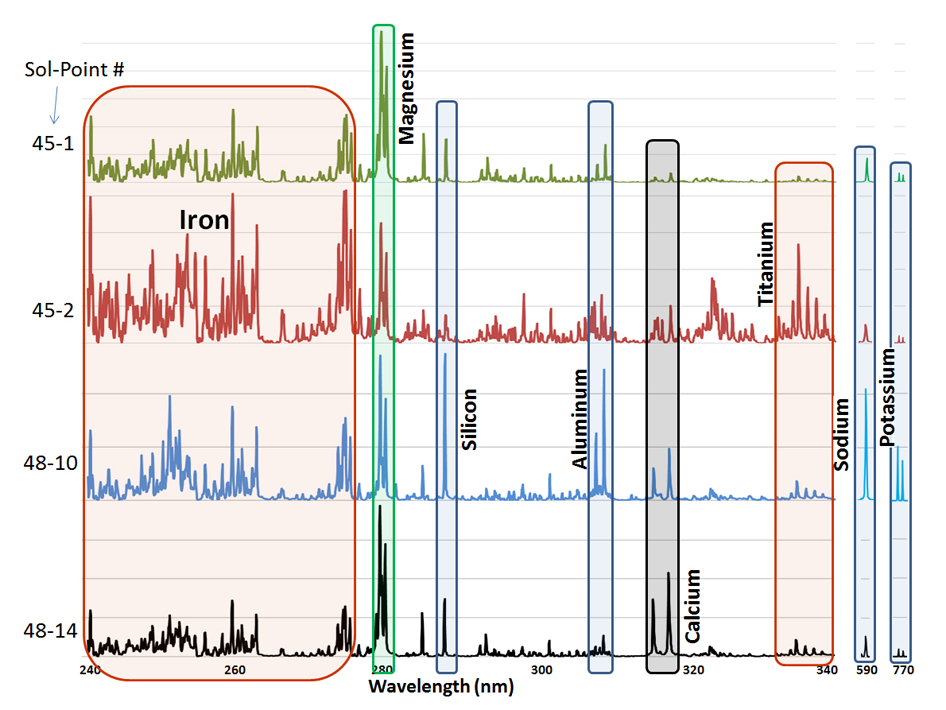 This graphic made from data obtained by NASA's Curiosity rover shows the ultraviolet portion of the spectrum of data obtained by the Chemistry and Camera (ChemCam) instrument, plus peaks for sodium and potassium, for four observation points on the rock "Jake Matijevic," which intrigued scientists. These were the outlying clusters in the previous figure. Chemcam analyzed a total of 14 points on the rock, zapping each one 30 times with its laser.

The colors correspond to the colors in the previous figure. Strong emission peaks or regions of peaks corresponding to major elements are highlighted and labeled. Observation point 45-1 is rich in magnesium and somewhat in iron, giving a composition suggestive of the mineral olivine. Point 45-2 is strongly enriched with iron and titanium, suggesting a metal oxide grain, possibly ilmenite. Point 48-10 is rich in silicon, aluminum, sodium and potassium, strongly suggestive of the mineral feldspar. Point 48-14 is high in calcium and has moderate magnesium, consistent with the mineral pyroxene. The top three spectra, or different wavelengths of radiation detected by the instrument, are averages of laser shots six through 30; the bottom spectrum is an average of laser shots 21 to 30. The spectra were obtained at ChemCam distances of 12.8 and 10.5 feet (3.9 and 3.2 meters) from the rock on Sept. 21, 2012, and Sept. 24, 2012 (sols 45 and 48).