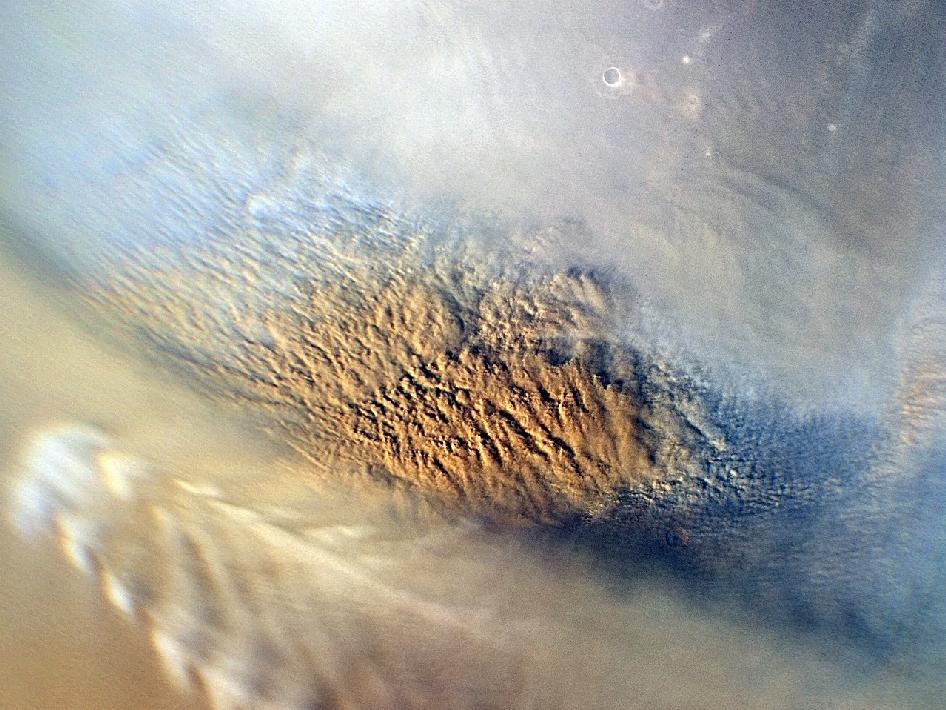 This close-up image of a dust storm on Mars was acquired by the Mars Color Imager instrument on NASA's Mars Reconnaissance Orbiter on Nov. 7, 2007, around 3 p.m. local time on Mars. Scientists working with NASA's Curiosity rover, which is set to land on Mars on Aug. 5 PDT (Aug. 6 EDT), are monitoring Mars each day for similar small storms that could either drift over the landing site or stir up dust that moves as haze over the site.

This image is centered on Utopia Planitia (53.6 degrees north latitude, 147.9 degrees east longitude), along the north seasonal polar cap edge in late northern winter. When NASA's Curiosity rover lands on Mars, it will be late southern winter. Scientists are looking at similar small storms that form near the south seasonal polar cap edge. The dust storm pictured here was short-lived, lasting less than 24 hours. The image also shows the seasonal north polar cap (at top of figure) and gravity-wave water ice clouds coming off of Mie crater, just south of the storm. Gravity-wave clouds, also called lee-wave clouds, are clouds that result from changes in atmospheric pressure, temperature and height because of vertical displacement, such as when wind blows over a mountain or crater wall.

The projection of the image is polar stereographic and the image has a resolution of about 0.6 miles (1 kilometer) per pixel. North is indicated with an arrow in this image. The white scale bar is 93 miles (150 kilometers).