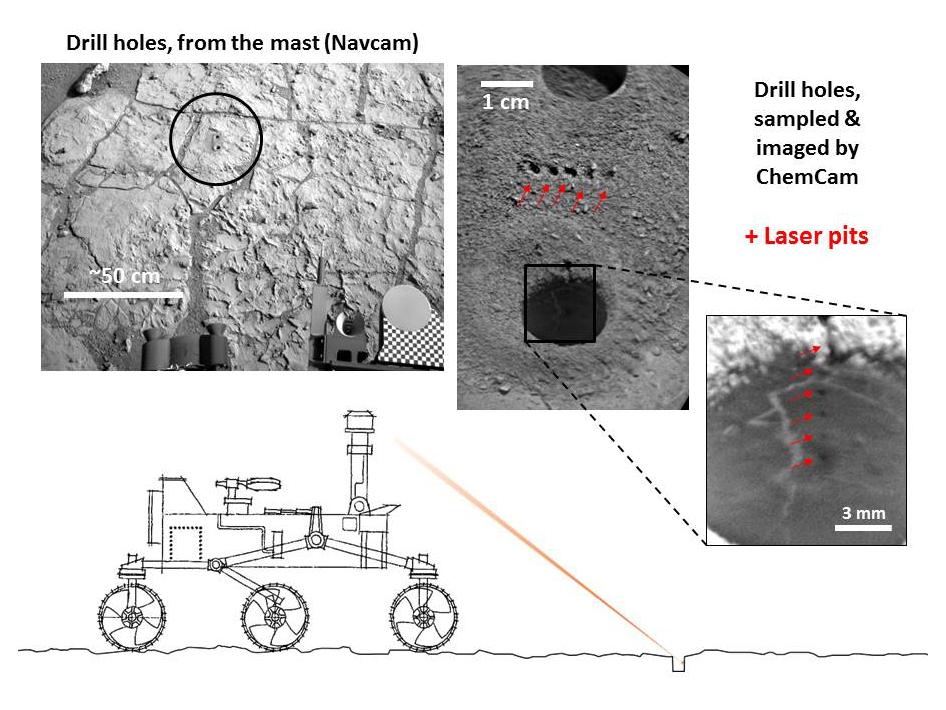 NASA's Curiosity Mars rover targeted the laser of the Chemistry and Camera (ChemCam) instrument with remarkable accuracy for assessing the composition of the wall of a drilled hole and tailings that resulted from the drilling. This graphic diagrams the pointing and shows the resulting pits created by the laser shots.

On the 180th Martian day, or sol, of Curiosity's work on Mars (Feb. 6, 2013), the rover performed a "mini drill test," followed on Sol 182 (Feb. 8, 2013) by the actual drilling to collect a sample from the interior of the rock. Both holes in the target rock "John Klein" are visible in the image at upper left, taken on Sol 182 by the rover's Navigation Camera (Navcam). Both the Navcam and the ChemCam are at the top of the Curiosity's remote-sensing mast.

Each drilled hole is about 0.63 inch (1.6 centimeters) wide, and they are located about 8 feet (about 2.5 meters) away from the top of the mast. So small, so far away…

On Sol 227 (March 26, 2013), ChemCam fired its laser 150 times (5 bursts of 30 shots, each burst at a different target point) on the drill tailings between the two holes and 300 times (10 bursts of 30 shots) in the drill hole itself. The same day, ChemCam's remote micro-imager (RMI) captured images of the laser pits: small craters in the loose tailing (center photo from RMI), and tiny scrapes on the hard surface of the hole walls (photo at right from RMI). Composition spectra from the ChemCam laser inspection are under investigation.

The photo on the right is a brightened version of the center portion of this unannotated version.