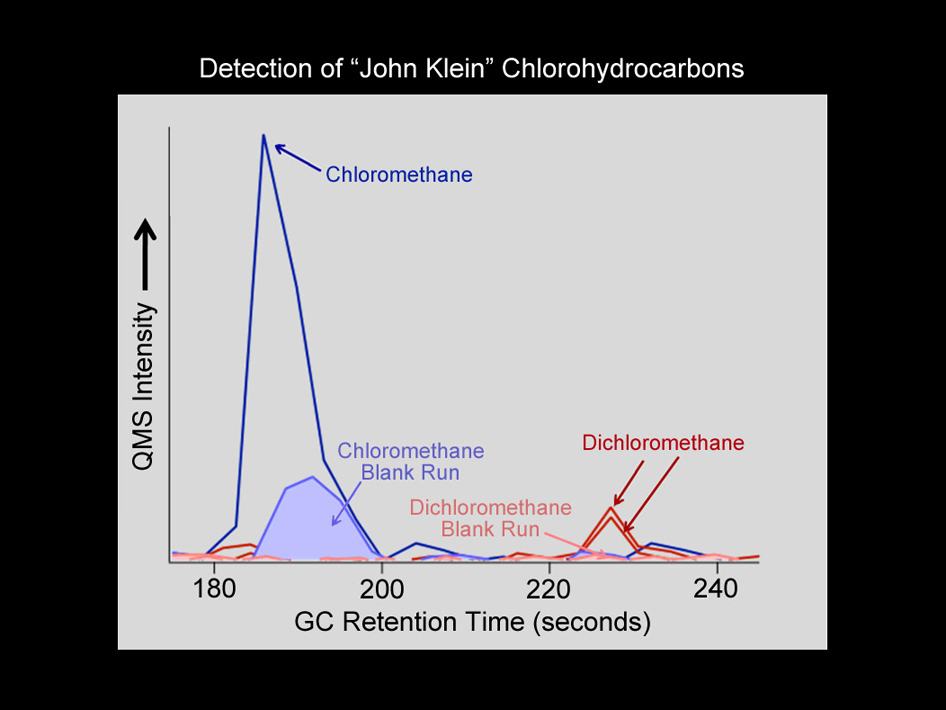 NASA's Curiosity rover has detected the simple carbon-containing compounds chloro- and dichloromethane from the powdered rock sample extracted from the "John Klein" rock on Mars. These species were detected by the gas chromatograph mass spectrometer (GCMS) on Curiosity's Sample Analysis at Mars instrument (SAM).

The blue peak on the left shows the presence of chloromethane and the two red peaks on the right show the presence of dichloromethane. The powdered rock sample from John Klein was heated and some of the gas released was injected into the capillary column of the GCMS. The time at which different compounds exited the gas chromatograph column and entered the mass spectrometer, and the patterns produced in the mass spectrometer indicated molecular identity.

This chart also indicates "blank runs," which were conducted on Mars prior to delivery of this drilled sample to SAM. The runs helped to insure that signals from the gases released from the John Klein sample were above background levels. Curiosity began drilling at John Klein in February 2013. The SAM analysis was conducted on Sol 200 (the 200th Martian day of Curosity's operations, which was Feb. 27, 2013, on Earth).

Both chloro- and dichloromethane were also detected earlier by SAM at the "Rocknest" drift. It is possible that these simple carbon-containing compounds were produced by the reaction between Martian carbon and chlorine released when this sample was heated in the SAM oven. However, analysis of an additional drilled sample is required to help scientists understand if instead any residual terrestrial carbon from the drill, or perhaps chlorine left over from the Rocknest sample, is responsible for the generation of some or all of these compounds. In any case, these detections demonstrate clearly that the SAM GCMS is performing as designed and ready to continue the search for organic compounds in Gale Crater.