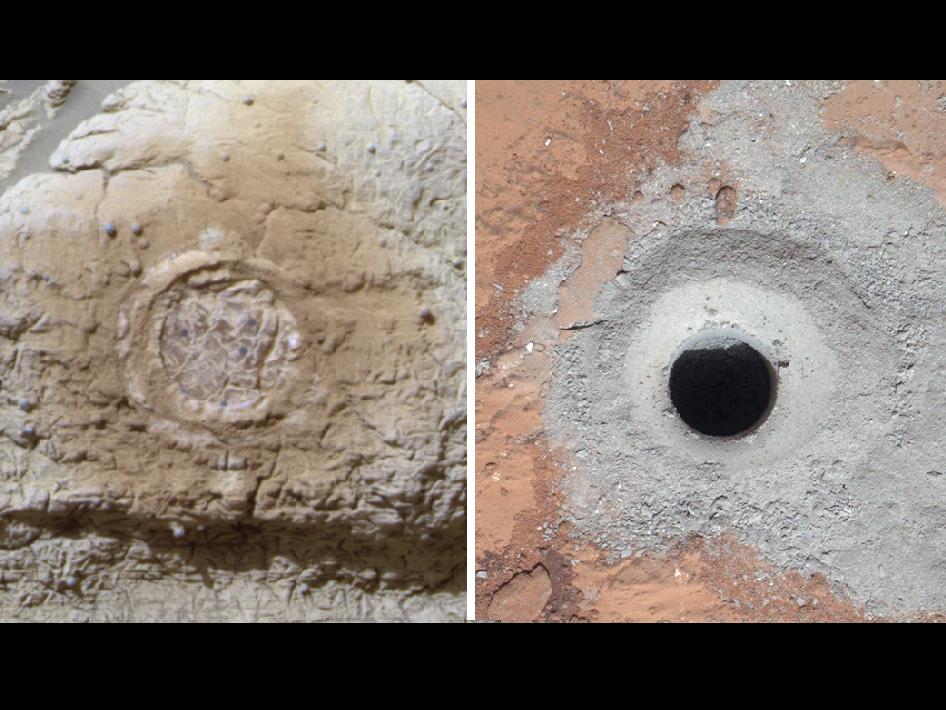 This set of images shows the results from the rock abrasion tool from NASA's Mars Exploration Rover Opportunity (left) and the drill from NASA's Curiosity rover (right). Note how the rock grindings from Opportunity are brownish red, indicating the presence of hematite, a strongly oxidized iron-bearing mineral. Such minerals are less supportive of habitability and also may degrade organic compounds. The diameter of the abraded circle is 1.8 inches (4.5 centimeters). The image was cropped from an image, taken on Sol 35 (the 35th Martian day of Opportunity's operations, or Feb. 28, 2004, on Earth) by Opportunity's panoramic camera at a target called "Guadalupe" inside Eagle Crater.

On the right is the hole produced by Curiosity during the first drilling into a rock on Mars to collect a sample from inside the rock. In this case, the rock produced gray tailings -- not red -- suggesting the presence of iron that is less oxidized. One possibility is magnetite, which was determined to be present by Curiosity's Chemistry and Mineralogy instrument. Magnetite has less oxygen than hematite and would be more compatible with habitability and the preservation of organics, all other factors being equal. These other factors would include the primary concentration of organics in the sedimentary environment, in addition to later exposure of rock to surface radiation. The diameter of the hole is 0.63 inch (1.6 centimeters), which is approximately 1/3 of that on the left-hand image. The image was cropped from PIA16726 . It was taken on Sol 182 (the 182d Martian day of Curiosity's operations, or Feb. 8, 2013, on Earth) by the Mars Hand Lens Imager on Curiosity's arm after that day's drilling at a target rock called "John Klein."