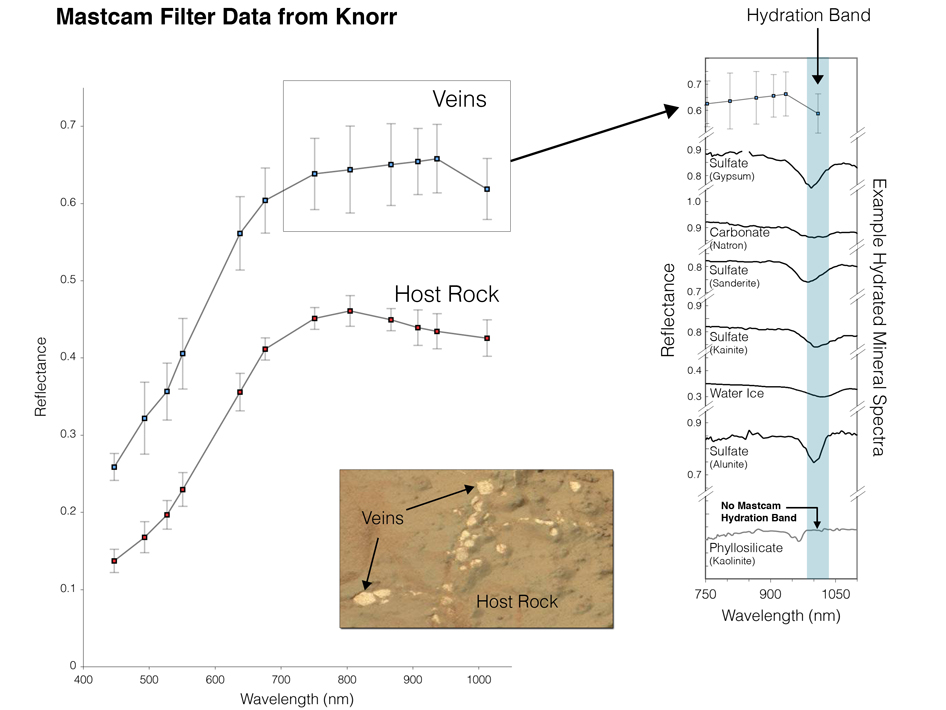 At different locations on the surface of the same rock, scientists can use the Mast Camera (Mastcam) on NASA's Mars rover Curiosity to measure the amount of reflected light at a series of different wavelengths. This yields spectral information that can be an indicator of composition.

The inset photograph in the lower center of this graphic shows two locations on a rock target called "Knorr," where Mastcam spectral measurements were made: A light-toned vein and part of the host rock. Knorr is in the "Yellowknife Bay" area of Gale Crater, close to Curiosity's "John Klein" rock drilling site.

The main graph shows the spectra recorded at those two points, with increasing wavelengths of visible light and near-infrared light from left to right, and with increasing intensity of reflectance from bottom to top. The bright vein shows greater reflectance through the range of wavelengths assessed. The shapes of the two curves also differ, especially where the vein spectrum dips in the near-infrared wavelengths. The range of wavelengths included in box-outlined portion of the vein spectrum is shown at the top of the group of reference spectra to the right. These reference spectra show how the dip in reflectance at those wavelengths in the vein material corresponds to dips in those wavelengths in several types of hydrated minerals -- minerals that have molecules of water bound into their crystalline structure, including hydrated calcium-sulfates. Mastcam is not sensitive to all hydrated minerals, however, including many phyllosilicates.

The reference spectra are from the U.S. Geological Survey's Spectral Library and the University of Winnipeg Planetary Spectrophotometer Facility.