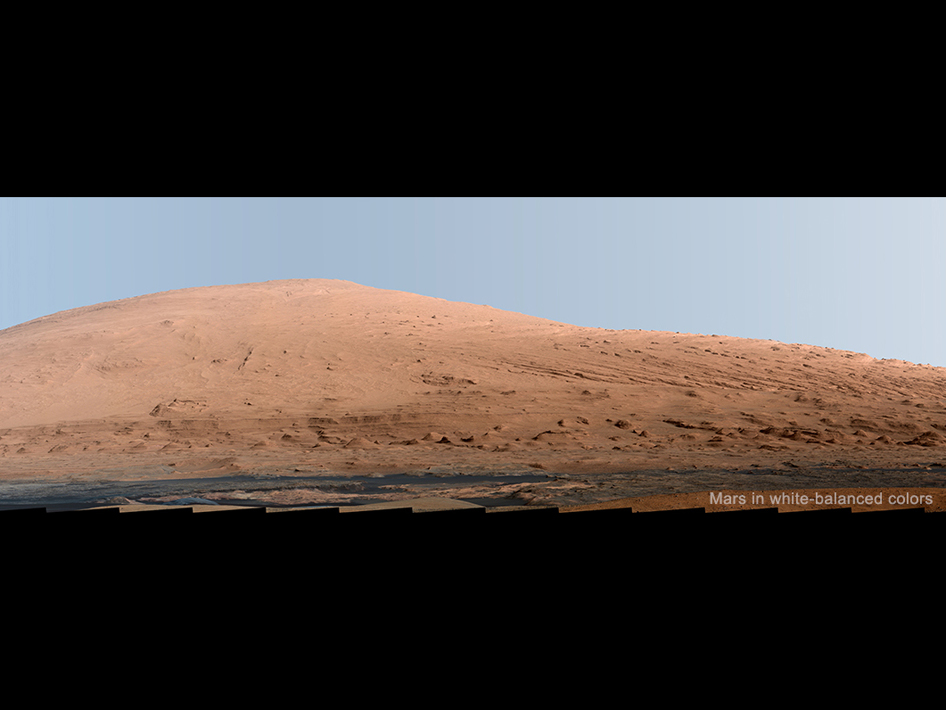 This mosaic of images from the Mast Camera (Mastcam) on NASA's Mars rover Curiosity shows Mount Sharp in a white-balanced color adjustment that makes the sky look overly blue but shows the terrain as if under Earth-like lighting. White-balancing helps scientists recognize rock materials based on their experience looking at rocks on Earth. The Martian sky would look more of a butterscotch color to the human eye. White balancing yields an overly blue hue in images that have very little blue information, such as Martian landscapes, because the white balancing tends to overcompensate for the low inherent blue content.

Mount Sharp, also called Aeolis Mons, is a layered mound in the center of Mars' Gale Crater, rising more than 3 miles (5 kilometers) above the crater floor, where Curiosity has been working since the rover's landing in August 2012. Lower slopes of Mount Sharp are the major destination for the mission, though the rover will first spend many more weeks around a location called "Yellowknife Bay," where it has found evidence of a past environment favorable for microbial life.

This mosaic was assembled from dozens of images from the 100-millimeter-focal-length telephoto lens camera mounted on the right side of the Mastcam instrument. The component images were taken during the 45th Martian day, or sol, of Curiosity's mission on Mars (Sept. 20, 2012). The sky has been filled out by extrapolating color and brightness information from the portions of the sky that were captured in images of the terrain.

A raw-color version of the mosaic is available at http://photojournal.jpl.nasa.gov/catalog/PIA16769. Raw color shows the scene's colors as they would look in a typical smart-phone camera photo.