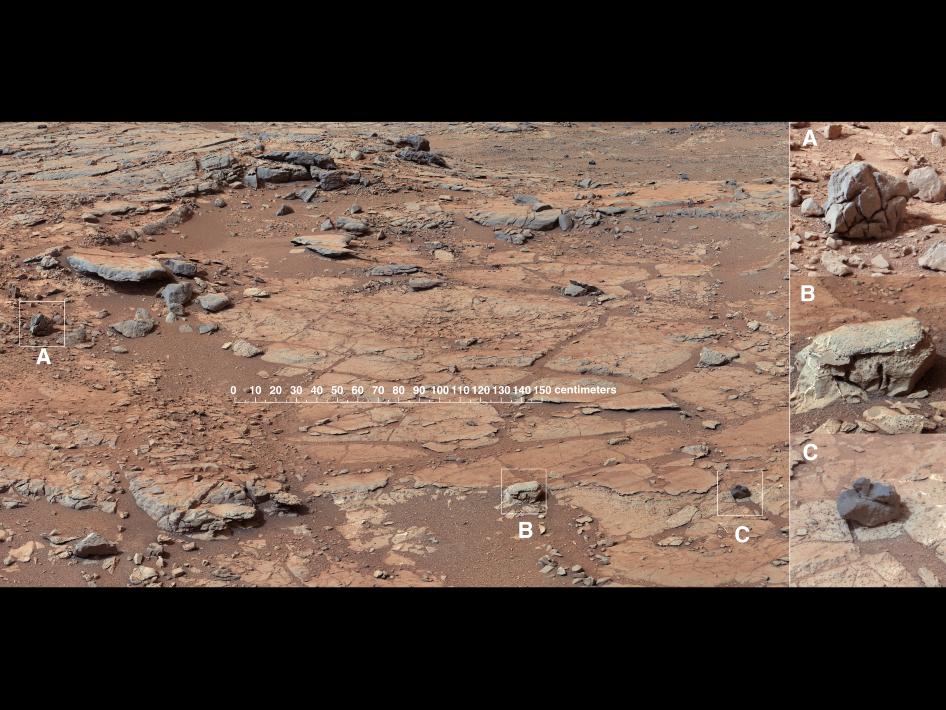 The right Mast Camera (Mastcam) of NASA's Curiosity Mars rover provided this contextual view of the vicinity of the location called "John Klein," selected as Curiosity's first drilling site. The distance from the camera to John Klein was about 16 feet (5 meters). The scale bar is 150 centimeters (59 inches) long. An unannotated version is also available.

This mosaic was assembled from images acquired on Sol (or Martian day) 138 between 8:30 and 9:25 in the morning, local Mars solar time (on Dec. 25, 2012). It illustrates the diversity of rock types from which the rover team could choose to sample. The enlargements of rocks seen on the right, and denoted by letters and boxes within the left image, represent this diversity. Each box is about 9 inches (22 centimeters) square.

Enlargement A shows a "bread-crusted" rock, whose surface is fractured in a polygonal pattern. This generally reflects a differential change in volume of a rock, with the outer part expanded relative to the interior. Enlargement B is representative of the material that will be sampled at the John Klein site, showing both light-toned veins and dark spots that show the relief of concretions. Enlargement C shows an exotic black rock that is similar in shape to more distant, dark rocks found higher in the local stratigraphy. That rock was probably emplaced here as part of material ejected by a crater-excavating impact.

The image has been white-balanced to show what the rocks would look like if they were on Earth.