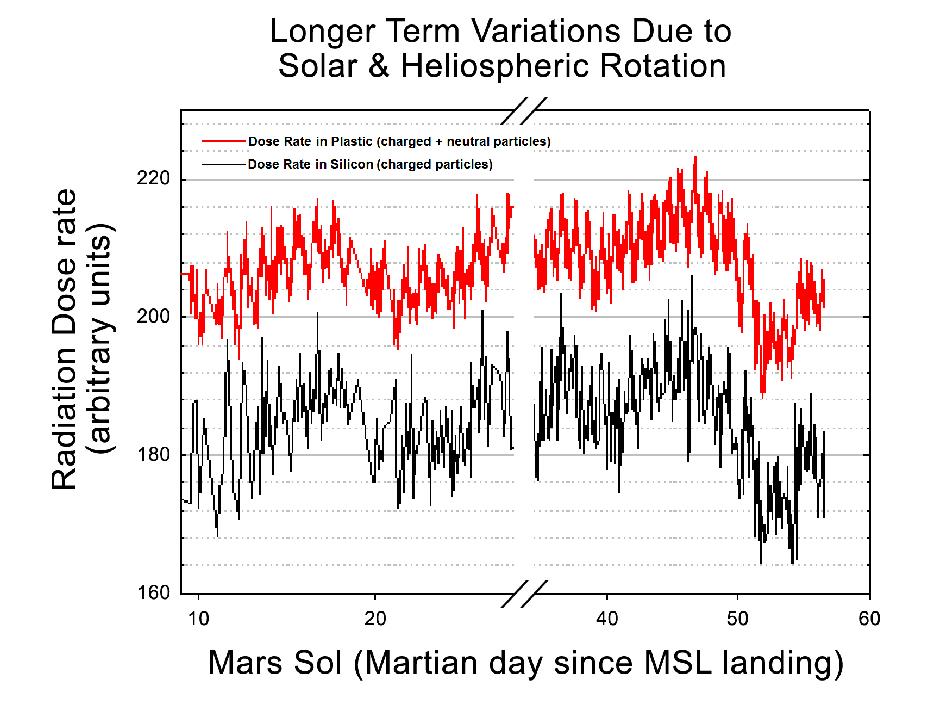 This graphic shows the variation of radiation dose measured by the Radiation Assessment Detector on NASA's Curiosity rover over about 50 sols, or Martian days, on Mars. (On Earth, Sol 10 was Aug. 15 and Sol 60 was Oct. 6, 2012.) The dose rate of charged particles was measured using silicon detectors and is shown in black. The total dose rate (from both charged particles and neutral particles) was measured using a plastic scintillator and is shown in red.

The variations occur each day and also on longer timescales. The daily variations are driven by the thickness of the Mars atmosphere. The longer-term variations appear to be driven by the structure of the gas and plasma in the interplanetary space near Mars. This structure, called the heliosphere, is magnetically tied to the sun, and rotates together with the sun over a period of about 27 days. The density of this heliospheric structure, as seen at Mars, varies with a roughly 27-day period, and provides "shielding" from galactic cosmic rays outside the solar system, in much the same way that the Mars atmosphere provides shielding.

The graphic has a few gaps for software uploads and other mission priorities. Radiation dose is given in arbitrary units to reflect the magnitude of the variations. Calibration of the absolute dose levels is ongoing.