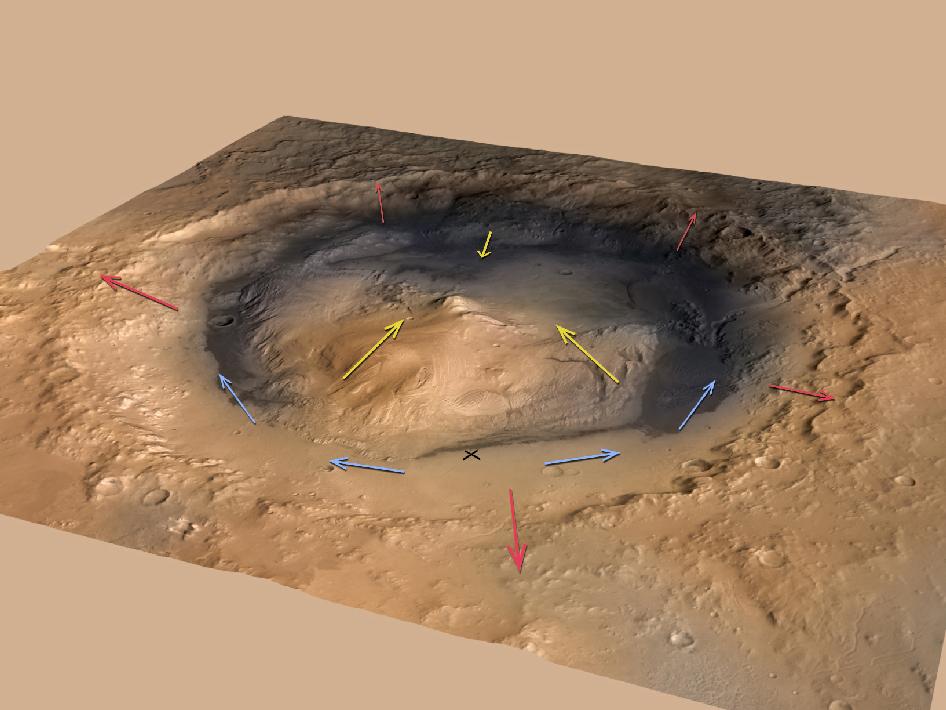 This graphic shows the pattern of winds predicted to be swirling around and inside Gale Crater, which is where NASA's Curiosity rover landed on Mars. Modeling the winds gives scientists a context for the data from Curiosity's Rover Environmental Monitoring Station (REMS).

Curiosity's current location is marked with an "X." The rover's setting within a broad depression between the mountain dubbed "Mount Sharp" to the southeast and the rim of Gale Crater to the northwest strongly affects wind measurements collected by REMS.

This snapshot shows midday conditions. In the daytime, winds rise out of the crater, shown by the red arrows, and up the mountain, shown by the yellow arrows. Blue arrows indicate winds that flow along the depression and seem, to Curiosity, to be coming up out of the depression since Curiosity is near the bottom. At its current location, Curiosity may be seeing a mixture of these winds, making it challenging to understand its weather readings.

The patterns reverse in the evening and overnight, when winds flow in the downhill direction.

The background image is an oblique view of Gale Crater, looking toward the southeast. It is an artist's impression using two-fold vertical exaggeration to emphasize the area's topography. The crater's diameter is 96 miles (154 kilometers).