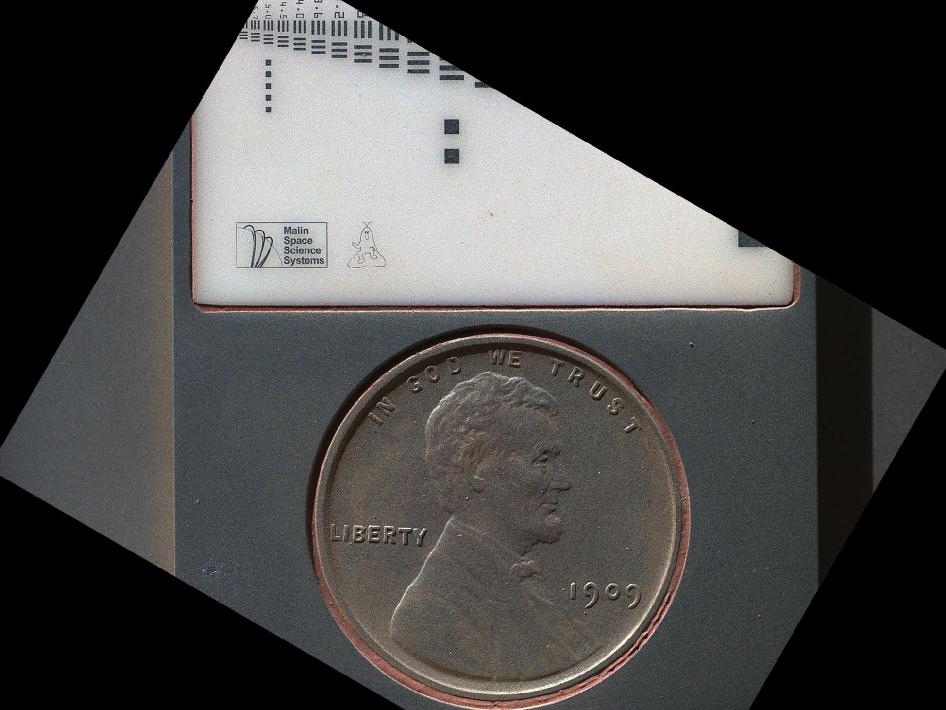 The penny in this image is part of a camera calibration target on NASA's Mars rover Curiosity. The Mars Hand Lens Imager (MAHLI) camera on the rover took this and other images of the MAHLI calibration target during the 34th Martian day, or sol, of Curiosity's work on Mars (Sept. 9, 2012).

The image was acquired with MAHLI at a distance of 5 centimeters (2 inches). MAHLI can acquire images of even higher resolution and can be positioned as close as 2.5 centimeters (about 1 inch); however, as this is the first checkout of the robotic arm, it was decided not to attempt to place the MAHLI at its closest focus distance during this test. The image shows that the calibration target has a coating of Martian dust on it. This is unsurprising â€” the target was facing directly toward the plume of dust stirred up by the sky crane's descent engines during the final phase of the 6 August 2012 landing.

The specific coin, provided by MAHLI's principal investigator, Ken Edgett, is a 1909 "VDB" penny. That was the first year Lincoln pennies were minted and the centennial of Abraham Lincoln's birth. The VDB refers to the initials of the coin's designer, Victor D. Brenner, which are on the reverse side. Brenner based the coin's low-relief portrait of Lincoln on a photograph taken Feb. 9, 1864, by Anthony Berger in the Washington, D.C. studio of Mathew Brady.

The calibration target for the Mars Hand Lens Imager (MAHLI) instrument also includes a "Joe the Martian" character, color references, a metric bar graphic, and a stair-step pattern for depth calibration. The MAHLI adjustable-focus, color camera at the end of Curiosity's robotic arm can be used for taking extreme close-ups of rocks and soil on Mars, as well as images from greater distances.