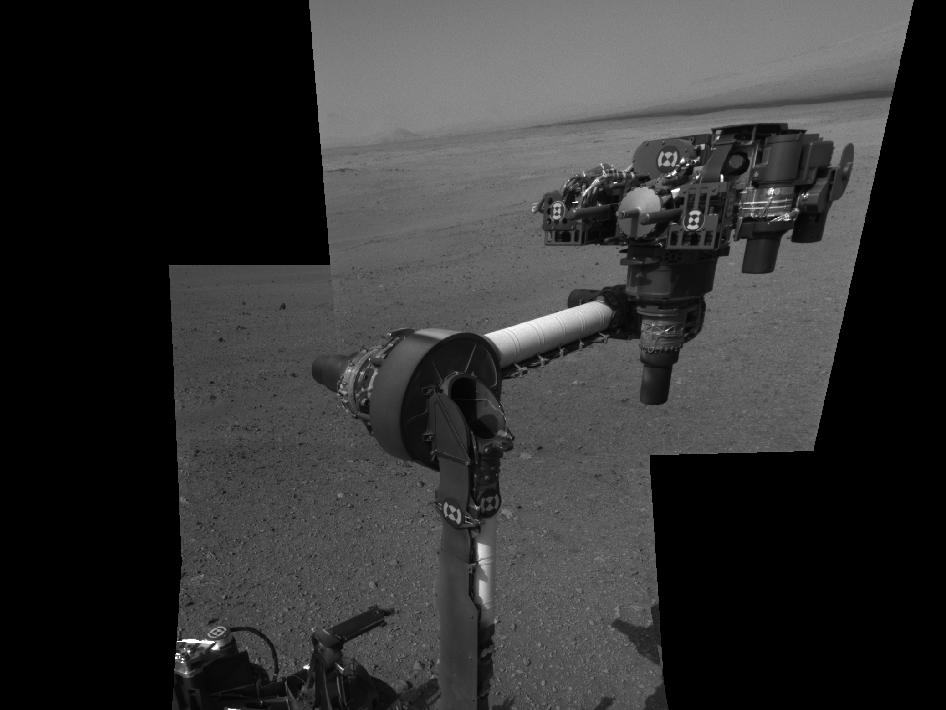 The extended robotic arm of NASA's Mars rover Curiosity can be seen in this mosaic of full-resolution images from Curiosity's Navigation camera (Navcam). Curiosity extended its arm on Aug. 20, 2012.

The 7-foot-long (2.1-meter-long) arm maneuvers a turret of tools including a camera, a drill, a spectrometer, a scoop and mechanisms for sieving and portioning samples of powdered rock and soil.

This mosaic is made using three images projected in a perspective view, which means the images are combined to appear as if they were taken from a single, larger camera.

A thumbnail version is available at http://photojournal.jpl.nasa.gov/catalog/PIA15692 .

Curiosity landed on Mars on Aug. 5 PDT (Aug. 6 EDT) to begin its two-year mission, using 10 instruments to assess whether a carefully chosen study area inside Gale Crater has ever offered environmental conditions favorable for microbial life. The Jet Propulsion Laboratory, a division of the California Institute of Technology, Pasadena, manages the Mars Science Laboratory Project, including Curiosity, for NASA's Science Mission Directorate, Washington. JPL designed and built the rover. The Space Division of MDA Information Systems Inc. built the robotic arm in Pasadena.