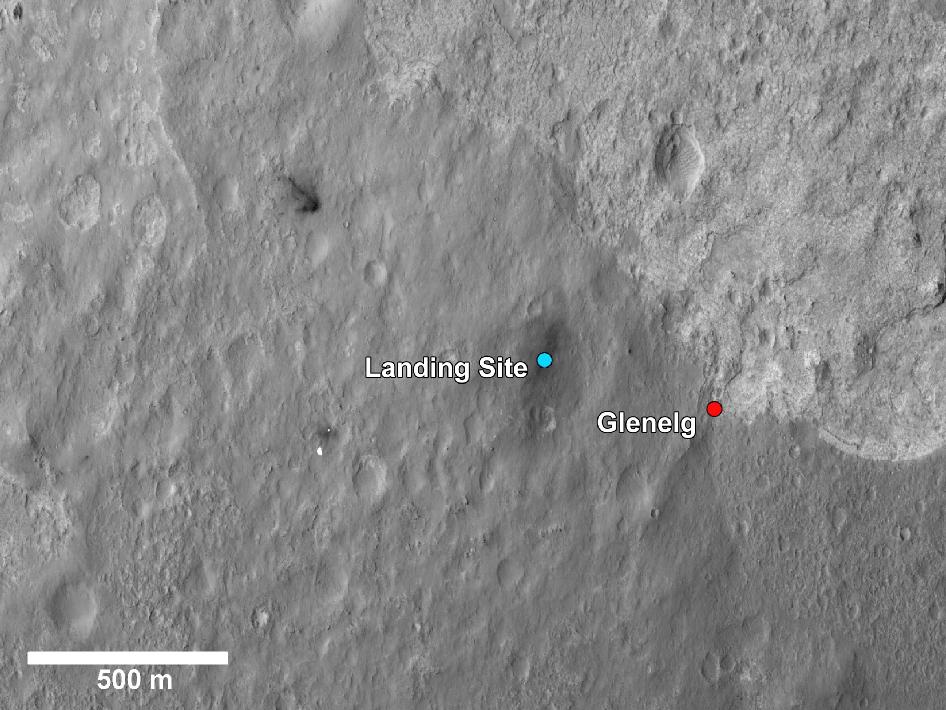 This image shows a closer view of the landing site of NASA's Curiosity rover and a destination nearby known as Glenelg. Curiosity landed inside Gale Crater on Mars on Aug. 5 PDT (Aug. 6 EDT) at the blue dot. It is planning on driving to an area marked with a red dot that is nicknamed Glenelg. That area marks the intersection of three kinds of terrain. Starting clockwise from the top of this image, scientists are interested in this brighter terrain because it may represent a kind of bedrock suitable for eventual drilling by Curiosity. The next terrain shows the marks of many small craters and intrigues scientists because it might represent an older or harder surface. The third, which is the kind of terrain Curiosity landed in, is interesting because scientists can try to determine if the same kind of rock texture at Goulburn, an area where blasts from the descent stage rocket engines scoured away some of the surface, also occurs at Glenelg.

The science team thought the name Glenelg was appropriate because, if Curiosity traveled there, it would visit the area twice -- both coming and going -- and the word Glenelg is a palindrome. After Glenelg, the rover will aim to drive to the base of Mount Sharp.

These annotations have been made on top of an image acquired by the High Resolution Imaging Science Experiment on NASA's Mars Reconnaissance Orbiter.