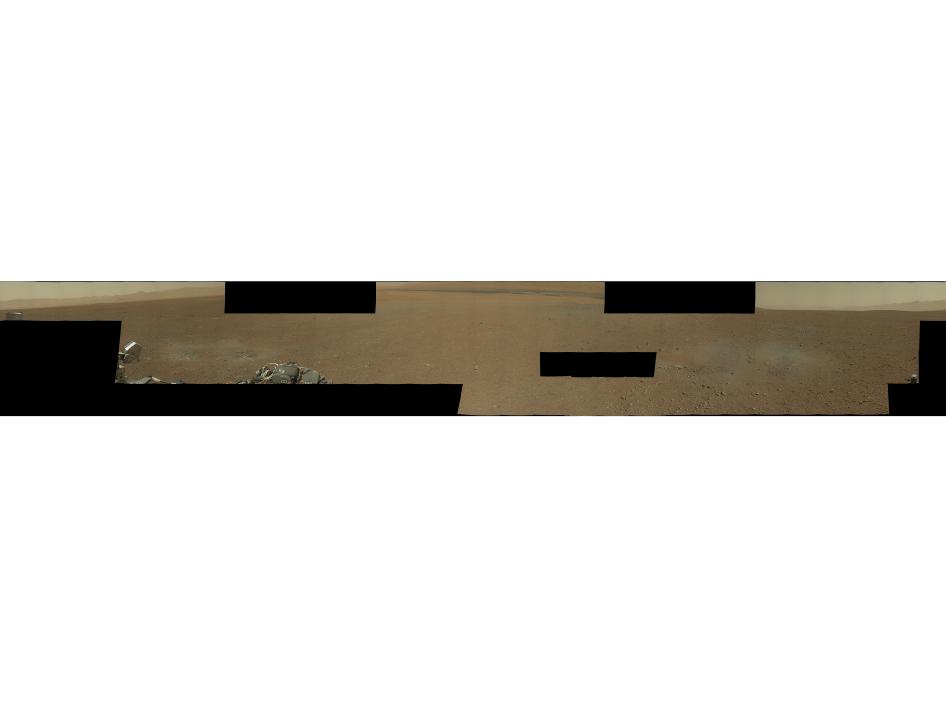 This image is the first high-resolution color mosaic from NASA's Curiosity rover, showing the geological environment around the rover's landing site in Gale Crater on Mars. The images show a landscape that closely resembles portions of the southwestern United States in its morphology, adding to the impression gained from the lower-resolution thumbnail mosaic released early in the week.

The colors in the main image are unmodified from those returned by the camera. While it is difficult to say whether this is what a human eye would see, it is what a cell phone or camcorder would record since the Mastcam takes color pictures in the exact same manner that consumer cameras acquire color images. The colors in a second version linked to the main image have been modified as if the scene were transported to Earth and illuminated by terrestrial sunlight. This processing, called "white balancing," is useful for scientists to be able to recognize and distinguish rocks by color in more familiar lighting.

The parts of this mosaic that are most interesting to geologists include a section on the crater wall north of the landing site where a network of valleys believed to have formed by water erosion enters Gale Crater from the outside. They are also studying a section that looks south of the landing site that provides an overview of the eventual geological targets Curiosity will explore, including the rock-strewn, gravelly surface nearby, the dark dune field and the layered buttes and mesas of the sedimentary rock of Mount Sharp.

Geologists are also taking a close look at an area excavated by the blast of the Mars Science Laboratory's descent stage rockets. With the loose debris blasted away by the rockets, details of the underlying materials are clearly seen. Of particular note is a well-defined, topmost layer that contains fragments of rock embedded in a matix of finer material.

This 79-image mosaic was acquired by the 34-millimeter Mastcam over about an hour of time on Aug. 8, 2012 PDT (Aug. 9, 2012 EDT). The full mosaic consists of 130 1,200 by 1,200 pixel full-color images, but this version includes all the images that have been returned to Earth so far. The black areas indicate images not yet returned by the rover.

An interactive QuickTime Virtual Reality product is also included. Users can use arrow keys to move side to side and up and down in this spherical projection of the high-resolution color mosaic from Mastcam. Users can also use the shift key to zoom in and the control key to zoom out. › View interactive 22Mb