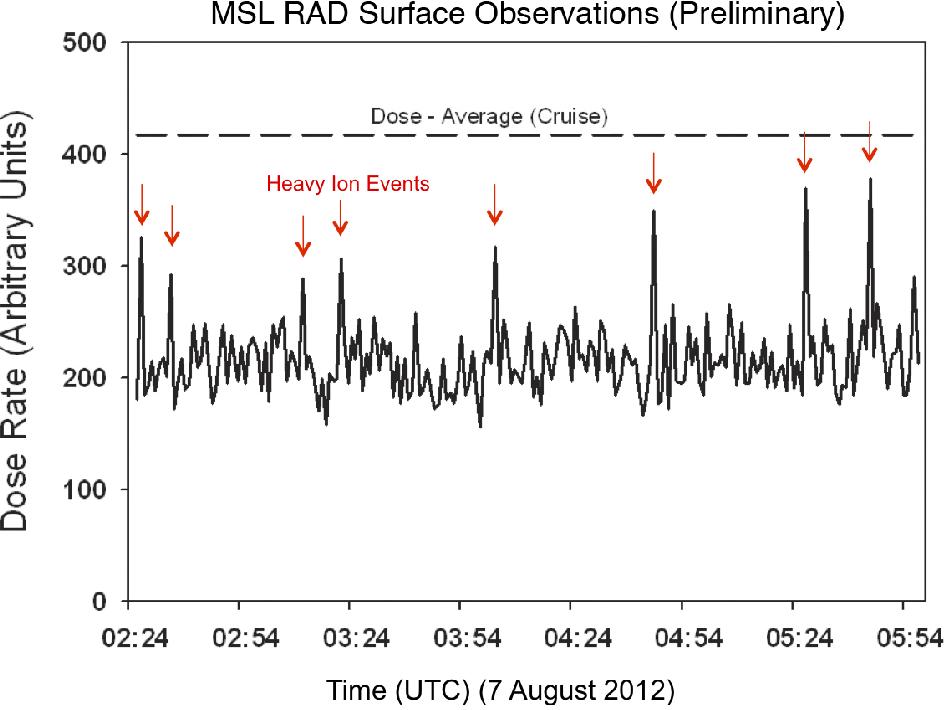 Like a human working in a radiation environment, NASA's Curiosity rover carries its own version of a dosimeter to measure radiation from outer space and the sun. This graphic shows the flux of radiation detected by Curiosity's Radiation Assessment Detector (RAD) on Mars over three and a half hours on Aug. 6 PDT (Aug. 7 UTC). The data show that the radiation levels measured on Mars during this period of quiet solar activity are reduced from the average radiation detected in space during Curiosity's cruise to Mars. This is explained by the rover being on the planet versus out in space, where it would have more exposure to radiation from all directions. Red arrows point to spikes in the radiation dose rate from heavy ion particles, which would be the most dangerous to astronauts.

During the course of the mission, scientists will study the variation of the radiation levels as a function of solar activity to understand and model the effects of the Martian atmosphere on radiation dose rates. Scientists and engineers will use this information to improve our understanding of how the radiation environment affects habitability for possible Martian microbial life, and, in addition, to help design the best kind of shielding needed for human beings on the surface.

RAD measures 26 kinds of charged particles as well as neutrons and gamma rays. Understanding how the flux of these different particles change with time is an important objective for RAD