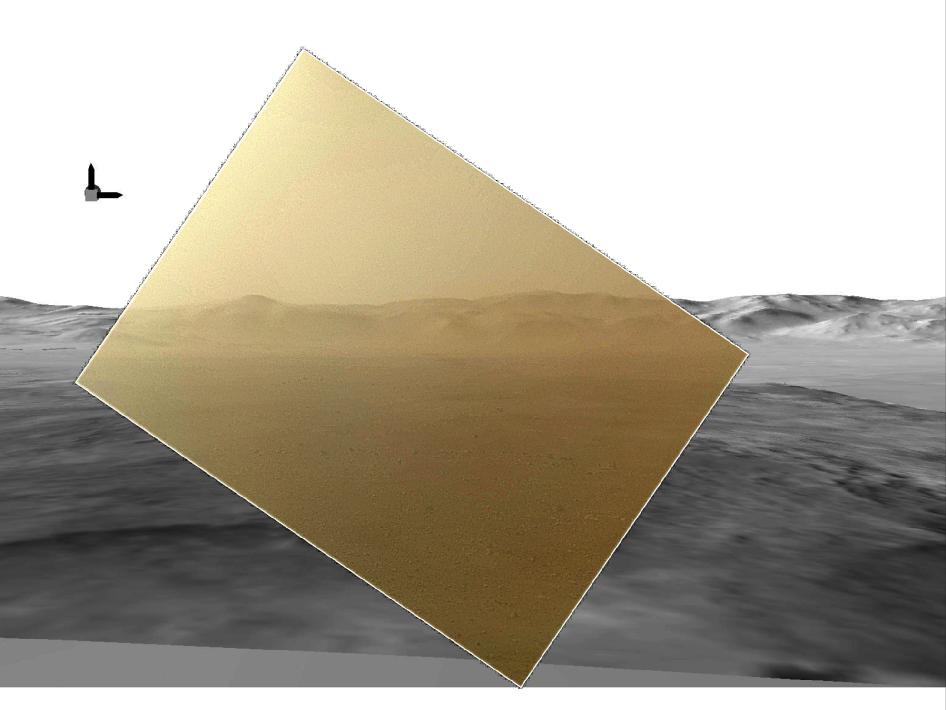 This picture of the Martian landing site of NASA's Curiosity rover puts a color view obtained by the rover in the context of a computer simulation derived from images acquired from orbiting spacecraft. The view looks north, showing a distant ridge that is the north wall and rim of Gale Crater.

The color image was obtained by Curiosity's Mars Hand Lens Imager (MAHLI) on Aug. 6 PDT (Aug. 7 UTC), the first Martian day after Curiosity's landing on Aug. 5 PDT (Aug. 6 UTC). It has been rendered about 10 percent transparent so that scientists can see how it matches the simulated terrain in the background. The MAHLI image was taken while the camera's transparent dust cover was still on. Curiosity's descent coated the cover with a thin film of dust.

The peak seen on the left-side of the MAHLI image is about 15 miles (24 kilometers) distant with a height of about 3,775 feet (1,150 meters) high. The box with arrows at the upper left indicates direction. The arrow pointing up is "up" with respect to the gravity of Mars. The arrow pointing to the right is east. North would be an arrow pointing into the image (that is, the MAHLI view is toward the north).

The MAHLI is located on the turret at the end of Curiosity's robotic arm. At the time the MAHLI image was acquired, the robotic arm was in its stowed position. It has been stowed since the rover was packaged for its Nov. 26, 2011, launch.

When the robotic arm, turret and MAHLI are stowed, the MAHLI is in a position that is rotated 30 degrees relative to the rover deck. The MAHLI image shown here has been rotated to correct for that tilt, so that the sky is "up" and the ground is "down." Here, MAHLI is looking out from the front left side of the rover. This is much like the view from the driver's side of cars sold in the U.S.

The main purpose of Curiosity's MAHLI camera is to acquire close-up, high-resolution views of rocks and soil at the rover's Gale Crater field site. The camera is capable of focusing on any target at distances of about 0.8 inch (2.1 centimeters) to infinity. This means it can, as shown here, also obtain pictures of the Martian landscape. This was the first time the MAHLI focus mechanism was operated since before launch and it performed flawlessly.