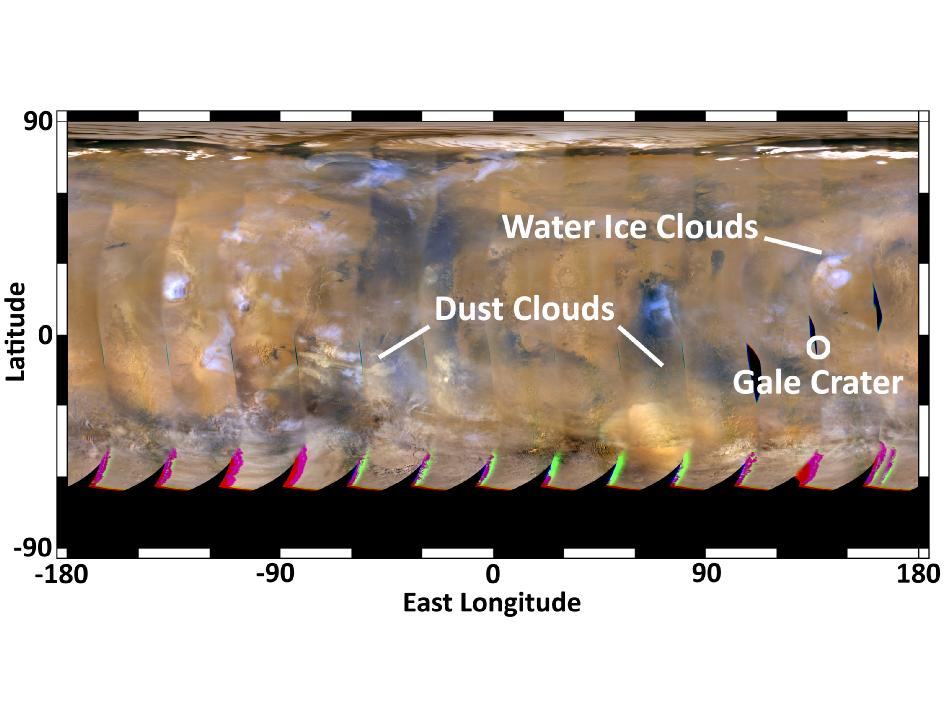 This global map of Mars was acquired on Aug. 4, 2012, by the Mars Color Imager instrument on NASA's Mars Reconnaissance Orbiter. One global map is generated each day to forecast weather conditions for the entry, descent and landing of NASA's Curiosity rover. The atmosphere is clear and seasonal around Gale Crater, in agreement with the computer models used to simulate Curiosity's landing. The dust storm southwest of Gale Crater, first seen on July 31, changed into an inactive dust cloud on Aug. 2, and now has dispersed even further. Dust activity is picking up on the other side of the planet, as shown by the dust clouds marked on the left side of the map. None of these dust clouds will arrive at Gale Crater before Curiosity does.

The map is a rectangular projection of Mars (from 90 degrees latitude to minus 90 degrees latitude, and minus 180 degrees longitude to 180 degrees east longitude). The landing site is located on the right side of the map, near 137 degrees east longitude and 4.5 degrees south latitude. The map shows water ice clouds at equatorial latitudes that are typical for late southern winter, when Mars is farther from the sun. Small, short-lived dust storms are common at this time of year on Mars and were taken into account when Curiosity's landing system was designed and tested. Larger and more long-lived dust storms are very rare at this time of year.