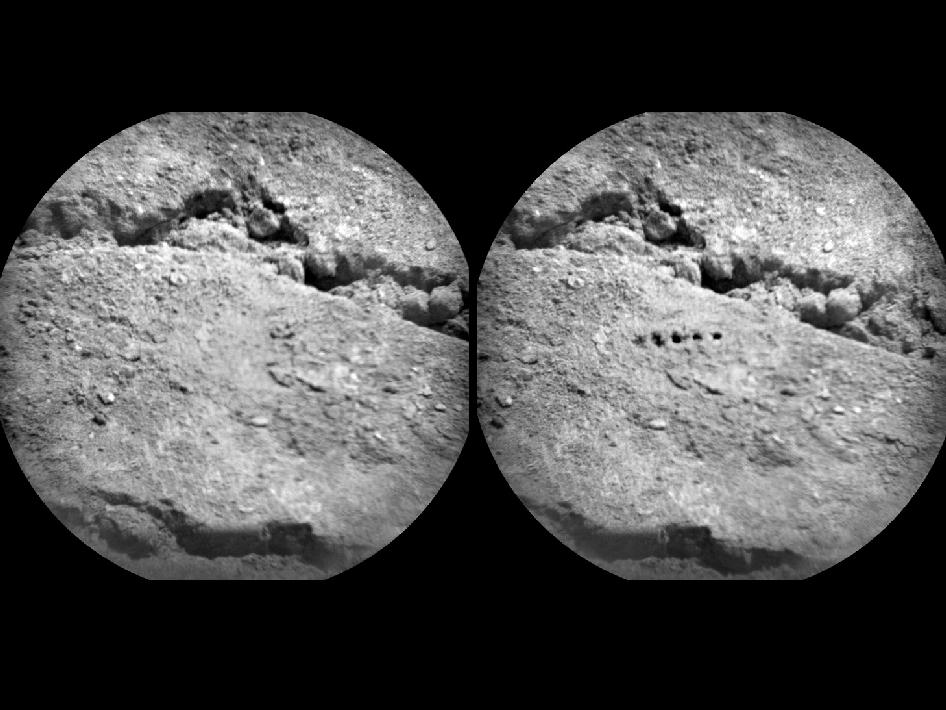 The Chemistry and Camera (ChemCam) instrument on NASA's Mars rover Curiosity used its laser to examine side-by-side points in a target patch of soil, leaving the marks apparent in this before-and-after comparison.

The two images were taken by ChemCam's Remote Micro-Imager from a distance of about 11.5 feet (3.5 meters). The diameter of the circular field of view is about 3.1 inches (7.9 centimeters).

Researchers used ChemCam to study this soil target, named "Beechey," during the 19th Martian day, or sol, of Curiosity's mission (Aug. 25, 2012). The observation mode, called a five-by-one raster, is a way to investigate chemical variability at short scale on rock or soil targets. For the Beechey study, each point received 50 shots of the instrument's laser. The points on the target were studied in sequence left to right. Each shot delivers more than a million watts of power for about five one-billionths of a second. The energy from the laser excites atoms in the target into a glowing state, and the instrument records the spectra of the resulting glow to identify what chemical elements are present in the target.

The holes seen here have widths of about 0.08 inch to 0.16 inch (2 to 4 millimeters), much larger than the size of the laser spot (0.017 inch or 0.43 millimeter at this distance). This demonstrates the power of the laser to evacuate dust and small unconsolidated grains. A preliminary analysis of the spectra recorded during this raster study show that the first laser shots look alike for each of the five points, but then variability is seen from shot to shot in a given point and from point to point.