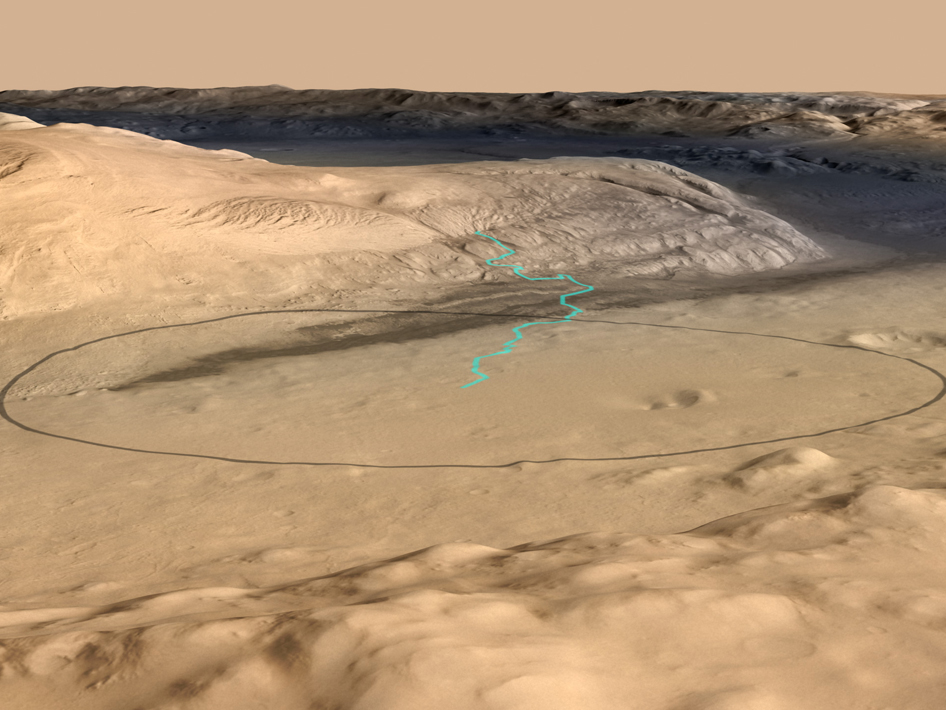 This image shows the target landing area for Curiosity, the rover of NASA's Mars Science Laboratory mission. The target is near the foot of a mountain inside Gale Crater. The mission's project science group is calling the nearby mountain Mount Sharp. This informal naming pays tribute to geologist Robert P. Sharp (1911-2004), a founder of planetary science, influential teacher of many current leaders in the field, and team member for NASA's early Mars missions.

This image oblique view of Mount Sharp is derived from a combination of elevation and imaging data from three Mars orbiters. The view is looking toward the southeast.

Techniques for improved landing precision give Curiosity about a 99 percent probability of landing within the ellipse outlined in black in this image. The ellipse is 12.4 miles (20 kilometers) by 15.5 miles (25 kilometers). The blue line shows one possible route the rover could take onto the lower flank of Mount Sharp. The actual route will depend on where the rover lands within the ellipse and on decisions to be made by scientists and engineers after the landing. Landing will be the evening of Aug. 5, 2012, Pacific Standard Time (early Aug. 6 Universal Time and Eastern Time).

Stratification on Mount Sharp suggests the mountain is a surviving remnant of an extensive series of deposits that were laid down after a massive impact that excavated Gale Crater more than 3 billion years ago. The stack of layers more than 3 miles (5 kilometers) high offers a history book of sequential chapters recording environmental conditions when each stratum was deposited.

During a prime mission lasting nearly two years after landing, Curiosity will use 10 instruments to investigate whether this area of Mars has ever offered conditions favorable for life, including the chemical ingredients for life. Some lower layers of Mount Sharp might tell of a lake within Gale Crater long ago, or wind-delivered sediments subsequently soaked by groundwater. In those layers, Mars orbiters have detected minerals that formed during wet conditions. Liquid water is a starting point in describing conditions favorable for life, but just the beginning of what Curiosity can investigate.