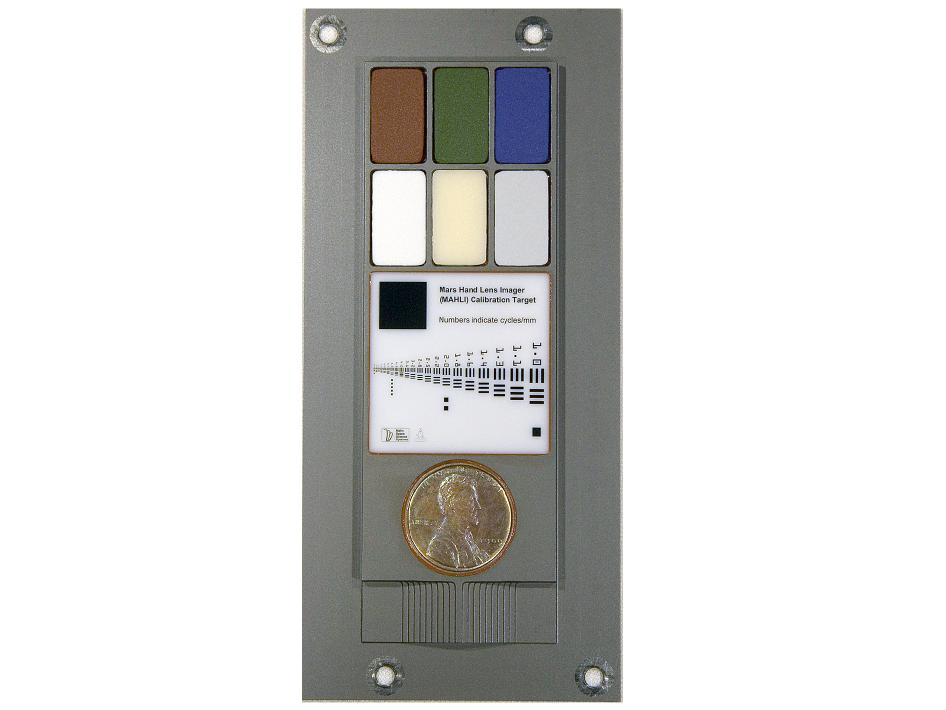 This image provides a way to have a full-size printout of the calibration target for the Mars Hand Lens Imager (MAHLI) camera on NASA's Mars rover Curiosity.

The MAHLI calibration target includes color chips, a metric standardized bar graphic, a penny, and a stair-step pattern for depth calibration. The MAHLI adjustable-focus, color camera is one of the tools on the turret at the end of Curiosity's robotic arm. Its calibration target is attached to the rover at the arm's shoulder joint.

This image is sized at 8.5 inches by 11 inches. Send it to a printer for paper of that size; ignore the protest that parts of the image are outside the printable area. Print it. Set a penny on the image of the calibration target's penny. If your penny and the printed image are the same size, you did it correctly. This print shows you the actual size of the MAHLI calibration target.

Patches of pigmented silicone on the upper portion of the MAHLI target serve as aids for interpreting color and brightness in images. Five of them -- red, green, blue, 40-percent gray and 60-percent gray -- are spares from calibration targets for the Panoramic Camera on NASA's Mars rovers Spirit and Opportunity. The sixth contains a fluorescent pigment that glows red when an ultraviolet light source on MAHLI shines on it.

The penny is from 1909, the first year Lincoln pennies were minted and the centennial of Abraham Lincoln's birth. Including it on the calibration target is a nod to geologists' tradition of placing a coin as a size reference in close-up photographs of rocks. It gives the public a familiar object for perceiving size easily.

MAHLI can provide three-dimensional information by taking a series of images at different focal ranges or by moving the camera between two images to yield stereo-pair images. The stair-step pattern at the bottom of the target, plus the penny, help with three-dimensional calibration using known surface shapes.