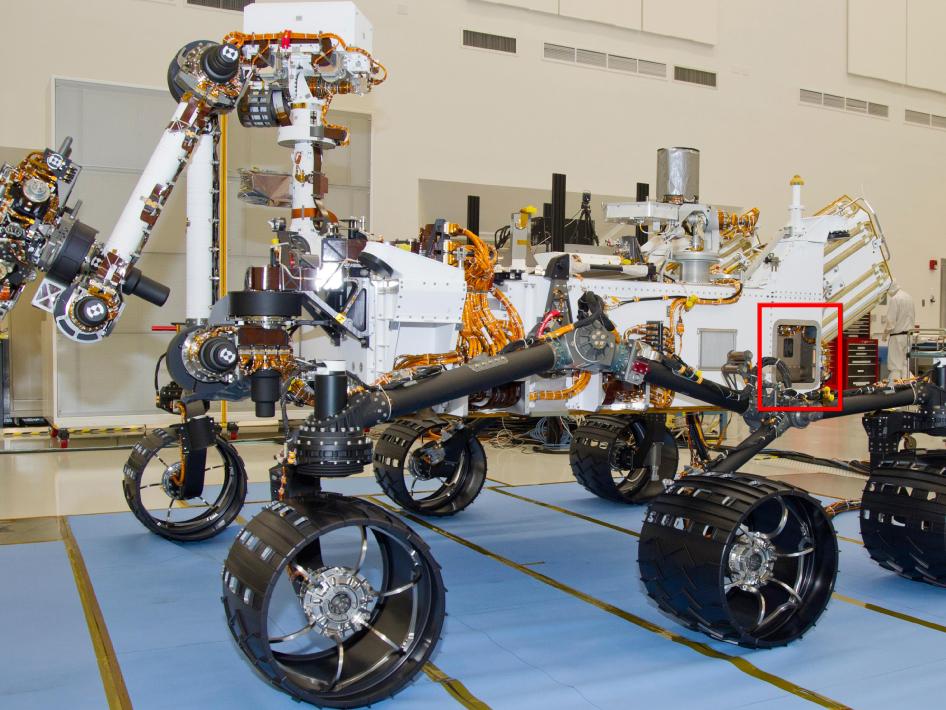 A Russian-built, neutron-shooting instrument on the Curiosity rover of NASA's Mars Science Laboratory mission will check for water-bearing minerals in the ground beneath the rover.

The instrument, named Dynamic Albedo of Neutrons, or DAN, has two major components: the pulsed neutron generator on the starboard side of the rover, and the detector and electronics module on the port side (location indicated by red outline). The pulsed neutron generator will shoot high-energy neutrons into the ground. If there is hydrogen in the shallow subsurface, the injected neutrons will bounce off the hydrogen atoms with a characteristic decrease in energy. Two detection devices in the detector and electronics module measure the rate and delay time of the reflected neutrons, yielding information about the amount and depth of any hydrogen. At the mission's near-equatorial landing area and in the oxidizing environment near the Martian surface, most hydrogen is expected to be in the form of water molecules or water-derived hydroxyl ions bound to minerals.

The Russian Federal Space Agency contributed DAN for the Mars Science Laboratory mission as part of broad collaboration between the United States and Russia in the exploration of space.

NASA will launch the Mars Science Laboratory spacecraft from Florida between Nov. 25 and Dec. 18, 2011. The rover will land on Mars in August, 2012. During a prime mission lasting one Mars year (nearly two Earth years), researchers will use the rover to investigate whether conditions in the Gale crater landing region have been favorable for microbial life and favorable for preserving evidence about whether life has existed.