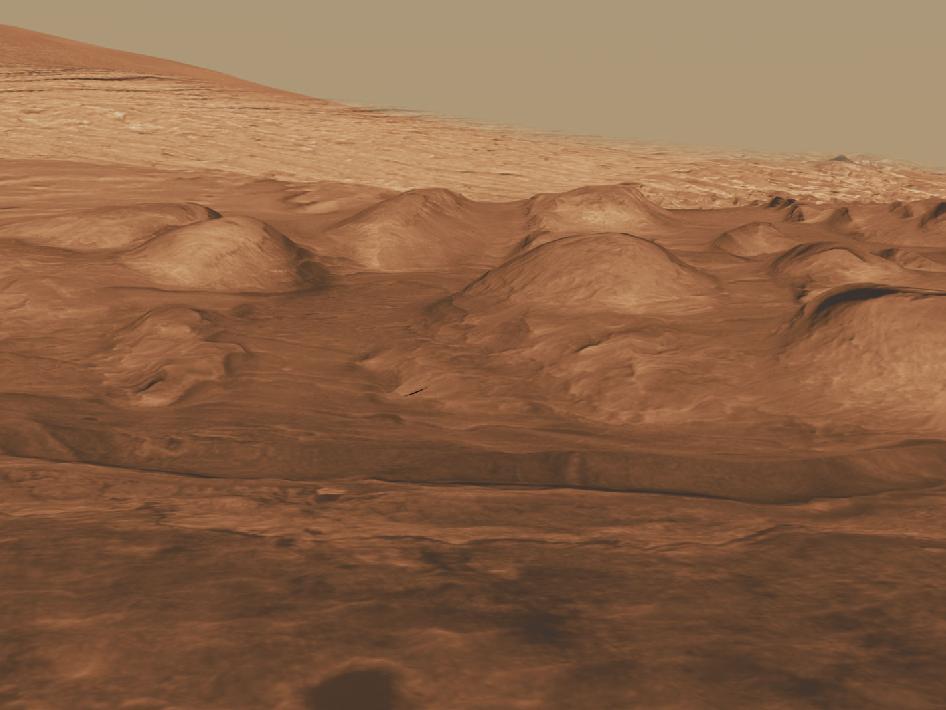 This oblique view of the lower mound in Gale crater shows layers of rock that preserve a record of environments on Mars. Here, orbiting instruments have detected signatures of both clay minerals and sulfate salts, with more clay minerals apparent in the foreground of this image and fewer in higher layers. This change in mineralogy may reflect a change in the ancient environment in Gale Crater.

Mars scientists have several important hypotheses about how these minerals may reflect changes in the amount of water on the surface of Mars. The Mars Science Laboratory rover, Curiosity, will use its full suite of instruments to study these minerals to provide insights into these ancient Martian environments. These rocks are also a prime target in the search for organic molecules since these past environments may have been habitable -- able to support microbial life. Scientists will study how organic molecules, if present, vary with mineralogical variations in the layers to understand how they formed and what influences their preservation.

The smaller hills in this view may provide clues to the modern water cycle on Mars. They contain sulfate salts that have water in them, and as temperatures warm into summer, some of that water may be released to the atmosphere. As temperatures cool, they may absorb water from the atmosphere. The Mars Science Laboratory team will investigate how water is exchanged between these minerals and the atmosphere, helping us understand Mars' modern climate. The hills are particularly useful for this investigation because different parts of the hills are exposed to different amounts of sunlight and thus to different temperatures. Curiosity will be able to compare the water in these contrasting areas as part of its investigations.