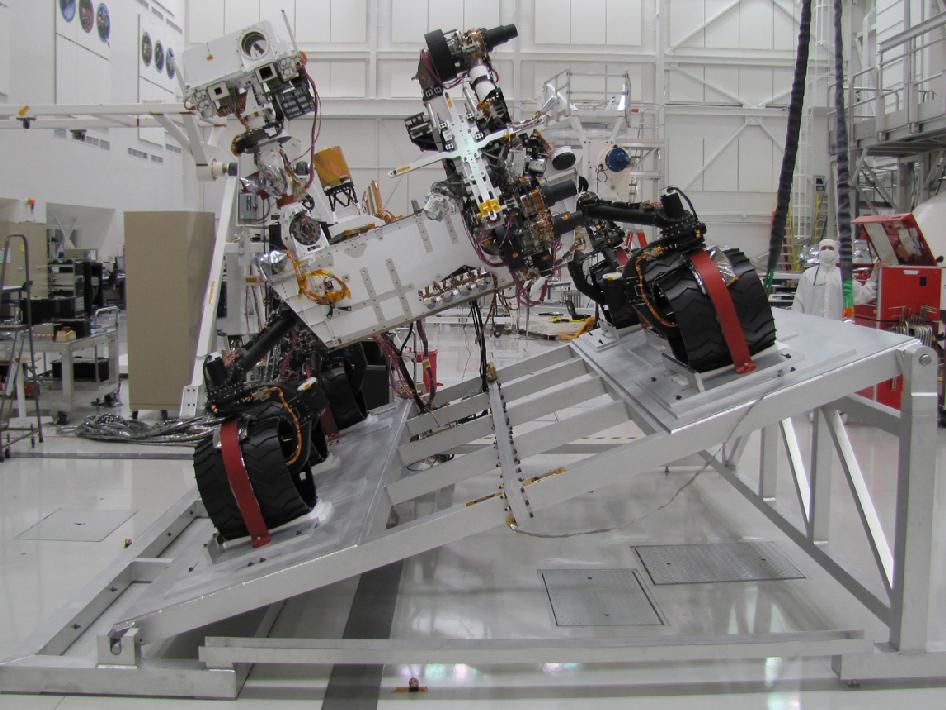 Curiosity on Tilt Table with Mast Up

The Mast Camera (Mastcam) on NASA's Mars rover Curiosity has two rectangular "eyes" near the top of the rover's remote sensing mast. The mast is on the right side of the rover, which puts it on the left side of this image taken from in front of the rover. The image shows Curiosity on a tilt table in the Spacecraft Assembly Facility at NASA's Jet Propulsion Laboratory, Pasadena, California. It was taken Sept. 15, 2010.

The lens openings for the two cameras of the Mastcam instrument are different sizes. The smaller one is for the telephoto eye, which has a focal length of 100 millimeters (see http://photojournal.jpl.nasa.gov/catalog/PIA13018). The larger one is for the wider-angle eye, with a focal length of 34 millimeters (see http://photojournal.jpl.nasa.gov/catalog/PIA13019). Each of these cameras can provide color images and high-definition video, and they can be combined for stereo views.

NASA's Mars Science Laboratory mission will use 10 science instruments on the Curiosity rover to investigate whether one of the most intriguing parts of Mars has had conditions favorable for microbial life and for preserving evidence about whether life has existed there.

Curiosity and other parts of the Mars Science Laboratory spacecraft are being prepared for launch between Nov. 25 and Dec. 18, 2011, and landing on Mars in August 2012.

JPL, a division of the California Institute of Technology in Pasadena, manages the Mars Science Laboratory Project for the NASA Science Mission Directorate, Washington.