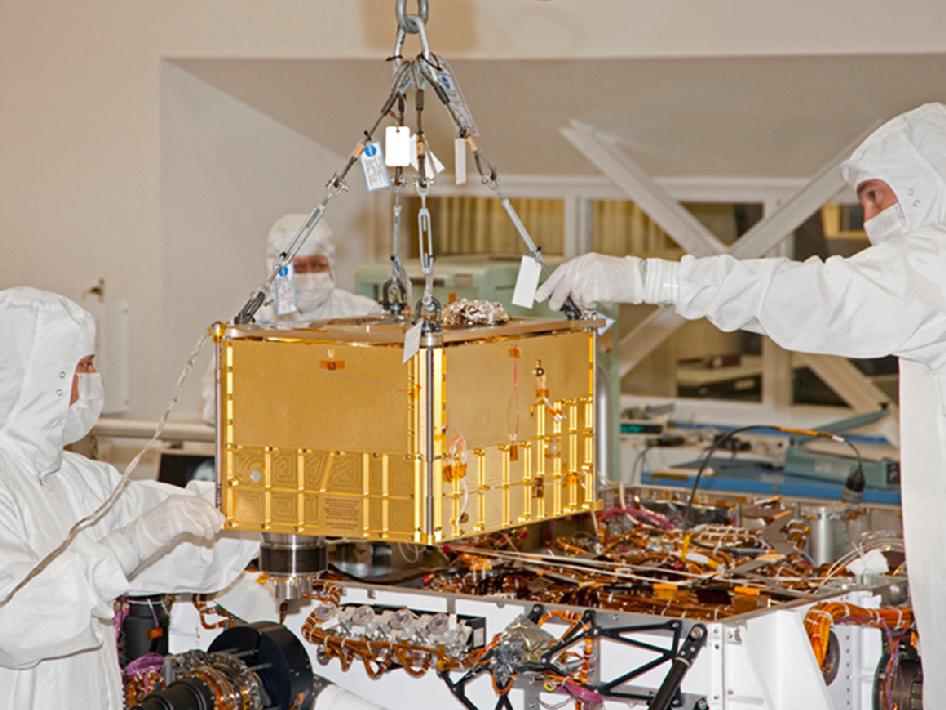 The Sample Analysis at Mars (SAM) instrument, largest of the 10 science instruments for NASA's Mars Science Laboratory mission, will examine samples of Martian rocks, soil and atmosphere for information about chemicals that are important to life and other chemical indicators about past and present environments.

In this photograph, technicians and engineers inside a clean room at NASA's Jet Propulsion Laboratory, Pasadena, Calif., prepare to install SAM into the mission's Mars rover, Curiosity. The photograph was taken on Jan. 6, 2011.

The analytical tools in SAM are a mass spectrometer built by NASA Goddard, a gas chromatograph built by French partners supported by France's national space agency in Paris, and a laser spectrometer built by JPL. SAM's sample manipulation system, including 74 sample cups for carrying powdered samples to two ovens, was built by Honeybee Robotics, New York. Curiosity's robotic arm will deliver powdered samples, drilled from rocks or scooped from soil, to SAM's inlet tubes on top of the rover deck. Ovens will heat most samples to about 1,000 degrees Celsius (about 1,800 degrees Fahrenheit). SAM will take in atmospheric samples through separate ports on the side of the rover. Inside SAM are more than 600 meters (more than 650 yards) of wiring, 52 microvalves, a saft-drink-can-size pump that rotates 100,000 times per minute, and many other components.

NASA will launch Curiosity from Florida between Nov. 25 and Dec. 18, 2011, together with other parts of the Mars Science Laboratory spacecraft for delivering the rover to the surface of Mars in August, 2012. During a prime mission lasting one Mars year (two Earth years), researchers will use the rover in one of the most intriguing areas of Mars to investigate whether conditions there have been favorable for microbial life and favorable for preserving evidence about whether life has existed.