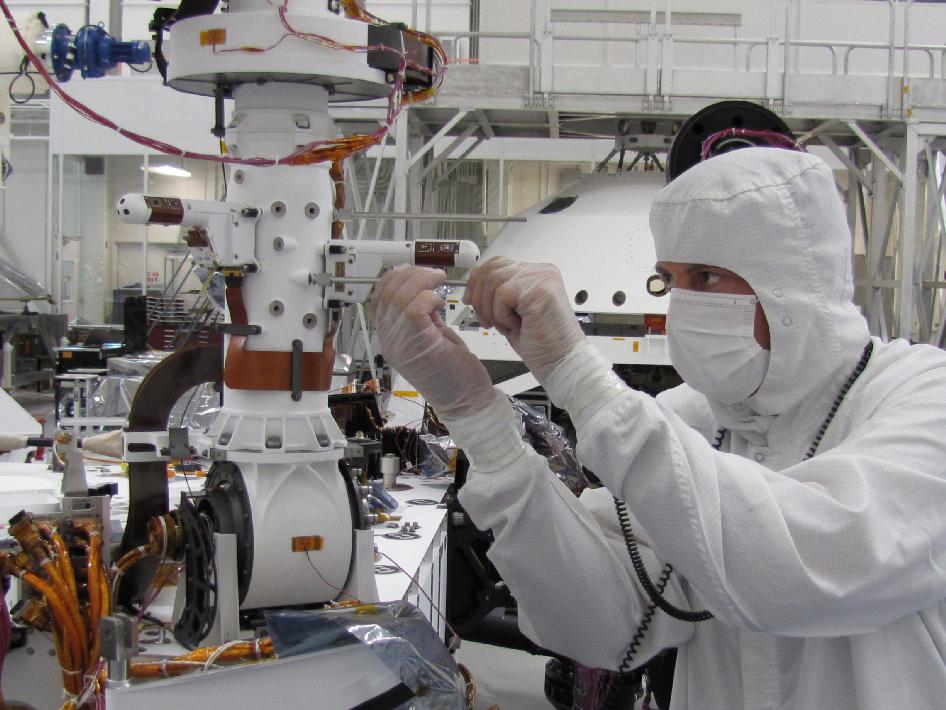 Sensors on two finger-like mini-booms extending horizontally from the mast of NASA's Mars rover Curiosity will monitor wind speed, wind direction and air temperature. One also will monitor humidity; the other also will monitor ground temperature. The sensors are part of the Rover Environmental Monitoring Station, or REMS, provided by Spain for the Mars Science Laboratory mission.

In this image, the spacecraft specialist's hands are just below one of the REMS mini-booms. The other mini-boom extends to the left a little farther up the mast. The image was taken during installation of the instrument in September 2011, inside a clean room at NASA's Jet Propulsion Laboratory, Pasadena, Calif. REMS also includes an ultraviolet-light sensor on the rover deck and, inside the body of the rover, an air-pressure sensor and the instrument's data recorder and electronic controls.

REMS is one of 10 science instruments on Curiosity. It was provided by Spain's Ministry of Science and Innovation and Spain's Center for Industrial Technology Development.

NASA's Mars Science Laboratory mission, managed by JPL for the NASA Science Mission Directorate, will land Curiosity on Mars in August 2012 for a prime mission of about two years (one Mars year).