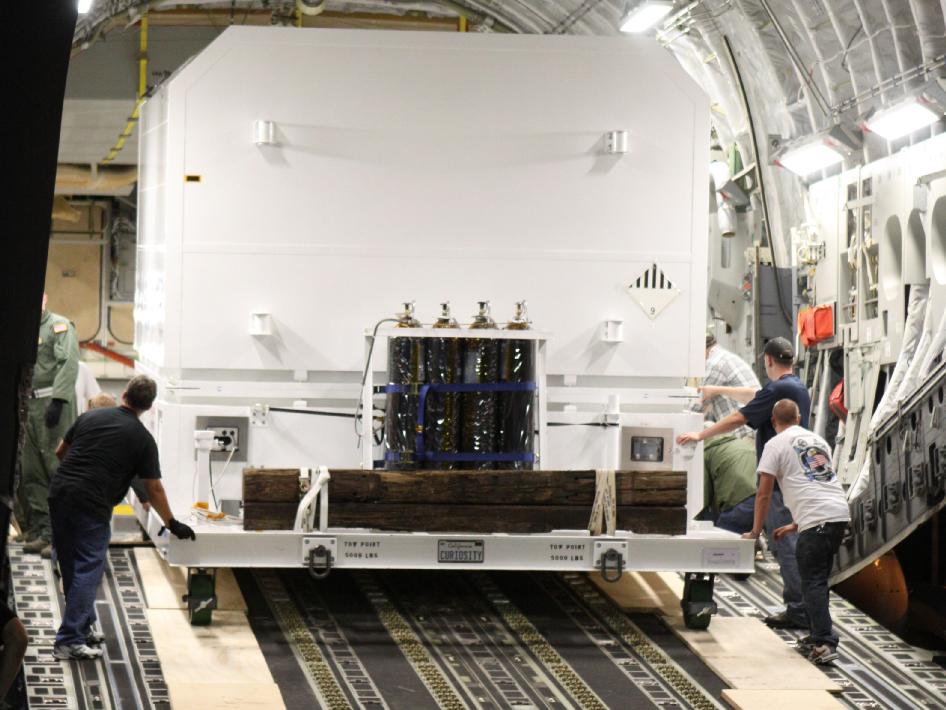 Curiosity, the Mars Science Laboratory mission's rover, along with the mission's descent stage, arrived at NASA's Kennedy Space Center, Fla., on June 22, 2011, aboard a U.S. Air Force C-17 transport plane. Here, personnel unload the crated rover from the plane. Crews removed the crated spacecraft components from the C-17 and drove them to the Kennedy Space Center clean room where the spacecraft is being prepared for launch in November.

The C-17 flight began at March Air Reserve Base in Riverside, Calif., where the crated hardware had been trucked from NASA's Jet Propulsion Laboratory in Pasadena, Calif. The Mars Science Laboratory aeroshell and cruise stage arrived at Kennedy last month.

The spacecraft will launch during the period Nov. 25 to Dec. 18, 2011, for a landing on Mars in August 2012. During a prime mission lasting one Martian year -- nearly two Earth years -- researchers will use the rover's tools to study whether the landing region has had environmental conditions favorable for supporting microbial life and for preserving clues about whether life existed.

JPL built the rover, descent stage and cruise stage and manages the mission for NASA's Science Mission Directorate in Washington. Launch management for the mission is the responsibility of NASA's Launch Services Program at Kennedy. The California Institute of Technology in Pasadena manages JPL for NASA.