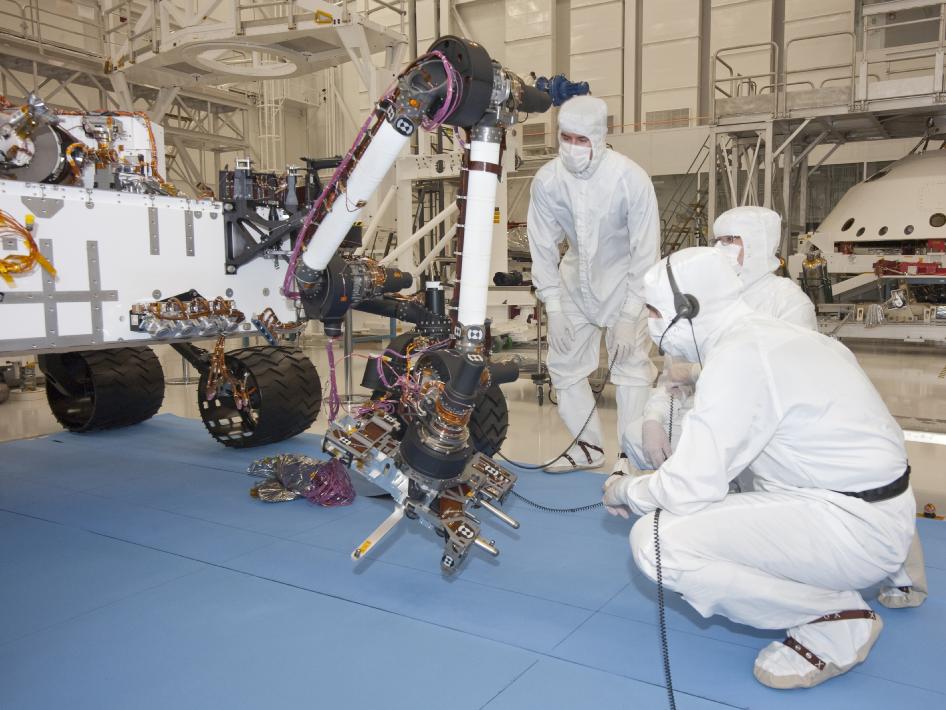 Test operators in a clean room at NASA's Jet Propulsion Laboratory, Pasadena, Calif., monitor some of the first motions by the robotic arm on the Mars rover Curiosity after installation in August 2010. This photo, taken Aug. 31, 2010, shows the arm in a partially extended position. The arm has a reach of about 2.3 meters (7.5 feet) from the front of the rover body.

For a full Martian year -- about two Earth years -- after landing in August 2012, the Mars Science Labortory mission will rely on this robotic arm for many frequently repeated research activities. One crucial set of moves that has never been performed on Mars will be to pull pulverized samples from the interior of Martian rocks and place them into laboratory instruments inside the rover.

The titanium arm has two joints at the shoulder, one at the elbow and two at the wrist. Each joint moves with a cold-tolerant actuator custom-built for the mission.

When these tests were performed for fine-tuning the rover's hand-eye coordination, the turret of tools at the end of the arm had not yet been installed. That toolkit, with a mass of about 33 kilograms (73 pounds), will include a percussive drill; a magnifying-lens camera; an element-identifying spectrometer; a rock brush; and mechanisms for scooping, sieving and portioning samples.