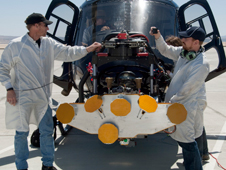 Testing for the JPL-managed Mars Science Laboratory or MSL project included suspending a full-scale engineering model of the MSL rover from a helicopter and flying pre-planned flight trajectories over Rogers Dry Lake at Edwards to simulate the rover's descent stage carrying the rover to the surface of Mars. JPL engineers needed to verify that the radar will provide accurate altitude and velocity measurements at Mars and that the suspended rover will not confuse the ability of the descent stage's radar to accurately calculate the rover's descent speed for a safe, on-target landing.

"Dryden offers a unique location to perform testing of this kind," said Carrie Rhoades, the Dryden flight operations engineer managing the MSL project at Dryden. "We have restricted airspace and a large dry lakebed that is useful in simulating several Mars-like features. Dryden is also conveniently close to JPL, so troubleshooting the system and fixing any issues has been relatively easy to accomplish," she said.

The helicopter, carrying the MSL radar on a special nose-mounted gimbal system, mimicked the MSL's descent stage on which the radar will be mounted during the mission to Mars. The unique, rocket-powered descent stage will lower the rover, named Curiosity, on cables directly to the planet's surface in a maneuver dubbed “skycrane.” The descent stage will then fly away to a preplanned crash after releasing the cables, leaving Curiosity with its wheels on the Martian surface, ready to begin its search for ancient habitats. 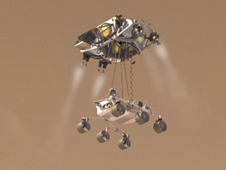 "Preliminary results indicate the radar performs as expected and we look forward to continuing our field tests at other Mars-like sites including Amboy Crater, Cadiz Sand Dunes, and Death Valley," Lee added.

The new skycrane landing method was chosen for the next Mars mission because Curiosity will be the largest rover yet sent to Mars. It's too large for the airbag-cushioned landing method used by NASA's Mars Pathfinder mission in 1997 and the twin Mars Exploration Rover landings in 2004. Also, the MSL mission has a requirement for landing at a more-precise point on Mars than previous rover missions, aiding in the selection of the landing concept.

Starting in 2008, Dryden has flown an F/A-18 in a series of MSL developmental flights designed to collect environmental control system data to help validate the MSL radar system. In one flight series, the F/A-18 carried a Quick Test Experimental Pod housing the radar's environmental control hardware to an altitude of 47,000 feet and made a series of dives to simulate a high-speed entry into the Martian atmosphere. More of these flights are scheduled in the coming months to assist JPL in further verifying the MSL radar performance. 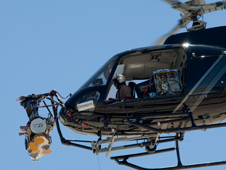 The Mars Science Laboratory descent stage radar attached to this Wolfe Air Aviation helicopter's nose gimbal was the focus of recent testing at NASA's Dryden Flight Research Center. (NASA / Tony Landis) Mars Science Lab mission components such as Curiosity, the descent stage, the cruise stage and the aeroshell are currently undergoing assembly and testing at JPL in Pasadena, Calif., in preparation for an autumn 2011 launch. Curiosity is scheduled to reach Mars in the summer of 2012.